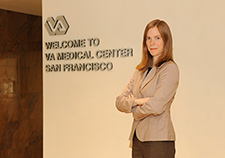 For Veterans with posttraumatic stress disorder, access to prompt mental health care can lead to significantly improved symptoms. Yet studies have consistently shown that Veterans who are eventually diagnosed with mental illnesses tend to wait, often for years after their deployment ends, before seeking help.

A study published online Aug. 1, 2014, in Psychiatric Services looked at nearly 40,000 Veterans of Iraq and Afghanistan who received VA mental health care between 2001 and 2011 and had a post-deployment diagnosis of PTSD. Of those, 75 percent, or around 30,000 Veterans, screened positive for PTSD when they eventually started mental health treatment.

The researchers analyzed the records of the Veterans to measure their PTSD symptoms both at their baseline appointment and at subsequent follow-ups. Along with this, they looked at how much time had elapsed between the end of each Veteran's service and his or her first mental health appointment.

What the research team found was that those who waited longer to get into care tended to fare worse. The Veterans who sought and received care earlier rather than later had lower rates of PTSD upon follow-up a year after they initiated care.

Each year of waiting lowers odds of improvement

For each year that a Veteran waited to initiate treatment, there was about a 5 percent increase in the odds of either not improving or worsening on the PTSD screen a year or more later. In other words, a Veteran who waited five years had 29 percent greater odds of screening positive at follow-up, compared with a Veteran who began treatment immediately.

"The sooner we can get these Veterans into care, the better their chances are for improving before their lives, relationships, and jobs suffer," says Maguen, also an associate professor at the University of California, San Francisco.

Part of the problem, she says, lies in the barriers many OIF and OEF Veterans face. "Many are young and are extremely busy with families, school, or work. Many live far away from the VA. Perhaps the single biggest barrier is that they're people with exceptional strength. They're used to solving issues on their own and for them to come in, they have to acknowledge that something is going on that they're unable to solve on their own."

Unlike in previous generations, today's Veterans may receive mental health care as part of their primary care in VA's integrated system. According to Maguen, that reduces the stigma associated with talking about their experiences, not only in combat, but in transitioning back to civilian life. "If everyone is getting the same treatment and talking to a mental health professional as part of an integrated care visit," says Maguen, "then that takes away some of the stigma."

'It's something we can change'

VA has already begun implementing integrated care models for all Veterans, and mental health care is becoming part of the suite of services Veterans receive upon making a primary care appointment. "This isn't just important to Veterans, but to their families, the community, providers, and VA leadership. We have to get the message out to Veterans to come in for care as soon as possible. [With mental illness] if you catch it early, you can make an impact on your symptoms in the long run," says Maguen.

"So many of the risk factors for mental illness are things that we may not be able to alter," she says," but this is a modifiable risk factor. It's something we can change, and that is exciting."