Index of foot health, developed in VA, has legs worldwide 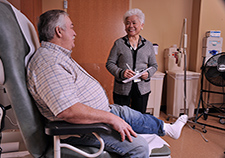 Dr. Elly Budiman-Mak administers the Foot Function Index to Ron Hollingsead, who served in the Marines during the Vietnam War. (Photo by Daniel DuVerney/Hines Media Service)

Dr. Elly Budiman-Mak administers the Foot Function Index to Ron Hollingsead, who served in the Marines during the Vietnam War. (Photo by Daniel DuVerney/Hines Media Service)

Don't worry if you didn't understand that first line. It's Danish for "your foot pain at its worst."

Patients in Denmark who have foot problems can now rate their pain and disability—responding to 23 brief questions in all, each on a scale of 1 to 10—using the Foot Function Index.

The index was developed by VA researchers in the 1980s. It's now been translated into 20 languages—Danish being the latest addition. From Italy and Iran to Turkey and Taiwan, the form is used around the world as a reliable measure of patients' foot health. It applies to patients of all ages and backgrounds, across all types of foot problems.

Dr. Elly Budiman-Mak, with VA's Center of Innovation for Complex Chronic Healthcare, led the effort to develop the index in the 1980s.

"We developed the FFI because there was no outcome measure for foot health and functioning in 1984," she says. "At the time we were working on a VA-funded study to prevent arthritis foot deformity. We wanted to measure outcomes, so we developed this very useful instrument."

Budiman-Mak says the index may seem simple, but it required much tedious and methodical work. Her team crafted the questions based on input from patients and clinicians. They then field-tested and validated the measure over a few years with different groups of patients.

The measure has three parts. The first part asks about pain, covering several situations: with or without shoes, for example, or in the morning versus the evening.

The second part focuses on disability. It asks patients to rate their difficulty walking in different settings, and going up or down stairs.

The third part asks about limits on activities. For example: "How much of the time do you stay in bed because of [pain in your feet]?"

There are lots of patient self-report measures used by foot surgeons, orthopedists, physical therapists, and other clinicians, but the FFI is one of the favorites worldwide. Budiman-Mak believes it has caught on in large part because of its ease of use and versatility.

'Very easy to apply to patients'

"The instrument is short, user-friendly, and it's written in the English language at the 8th-grade level," she says. "Therefore, it's clinically very easy to apply to patients."

The design, Budiman-Mak points out, is based on the International Classification of Functioning, Disability and Health, a framework developed by the World Health Organization to measure health and disability in individuals and populations.

A revised version of the FFI, developed in 2006, added some psychosocial questions, focused on foot-related quality of life. Now, both the original and the revised version are in wide use.