Chemo without the side effects: Scientists look to gold, toad skin for answers 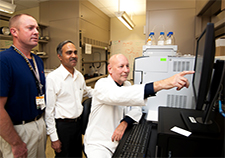 (From left) Drs. Charles Smith, Raghuraman Kannan, and Timothy Hoffman at the Truman VA Medical Center and the University of Missouri-Columbia are studying gold nanocage delivery of chemotherapeutic agents as a means to specifically target cancer cells to enhance tumor treatment effectiveness. (Photo by Travis Weger)

(From left) Drs. Charles Smith, Raghuraman Kannan, and Timothy Hoffman at the Truman VA Medical Center and the University of Missouri-Columbia are studying gold nanocage delivery of chemotherapeutic agents as a means to specifically target cancer cells to enhance tumor treatment effectiveness. (Photo by Travis Weger)

There are few treatments as simultaneously important and notorious as chemotherapy. Necessary to kill cancer cells, it also often leads to fatigue, hair loss, nausea, infertility, organ damage, and more.

Yet without chemotherapy, essentially a suite of anti-cancer drugs that target certain, rapidly dividing cells, cancer would be allowed to grow unabated in patients. Death would be all but certain in many cases.

The problem, according to researchers, isn't so much the treatment, but how it is delivered. "Right now less than one percent of the drug gets to the tumor," says Dr. Raghuraman Kannan, associate professor of radiology and biological engineering and the Michael J. and Sharon R. Bukstein Chair in Cancer Research at the University of Missouri. The other 99 percent of the drug, meanwhile, is distributed throughout the rest of the body, where it wreaks havoc.

Think of napalm razing a field when all you need is a single bullet.

Raghuraman and his colleagues have developed just that, something his colleague described as a "magic bullet," a non-toxic payload for carrying anti-cancer drugs and delivering them directly to tumors. 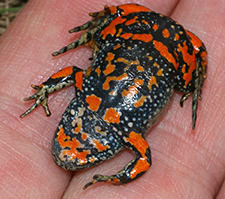 The European fire-bellied toad has a chemical in its skin—now simulated in labs—that binds with cancer cells and is helping scientists develop targeted chemotherapy. (Photo by Christian Fischer via Wikimedia Commons)

The European fire-bellied toad has a chemical in its skin—now simulated in labs—that binds with cancer cells and is helping scientists develop targeted chemotherapy. (Photo by Christian Fischer via Wikimedia Commons)

More specifically, gold nanocages—tiny capsules that can carry drugs. The nanocages are small enough—around 40 nanometers in size—that they can fit through cell membranes. (One nanometer is a billionth of a meter.) Once the nanocages are inside the cancer cells, researchers can hit them with a laser, causing them to release the drug. They are, in military parlance, targeted warheads.

But the military analogies don't stop there. In order to get tumorous cells to accept the nanocage, researchers went farther back in time, to the Trojan horse. In the well-known legend, Greek warriors hide inside a towering wooden horse and emerge at night to open the gates and allow the Greek army to sack Troy.

Taking the place of a horse in this story, though, is a small, slightly poisonous amphibian, the European fire-bellied toad, scientific name Bombina bombina. Some three decades ago, scientists isolated a 14-amino-acid peptide in the skin of the toad. Called bombesin, it can be programmed to couple with many types of tumorous cells. Fortunately for the toads, bombesin can now be created artificially in labs.

Protein receptors in tumorous cells, for their part, recognize the peptide as a normal hormone and, just like the hapless Trojans, let it through the gates and into the cell, never realizing that behind it trails a gold nanocage full of chemotherapy drugs.

In a recent paper, published online in the journal Bioconjugate Chemistry on July 29, 2014, Kannan and colleagues outline the mechanics through which a gold nanocage bonded with bombesin could penetrate tumors effectively, efficiently, and without the numerous patient side effects associated with traditional chemotherapy.

But the paper isn't just theoretical. The researchers actually witnessed the cages penetrating directly into the tumor cells.

"It's a tumor-targeting delivery vehicle," says Dr. Timothy Hoffman, a research career scientist and director of VA's Biomolecular Imaging Center at the Harry S. Truman Memorial VA Hospital in Columbia, Mo. Hoffman and his colleague, Dr. Jeff Smith, also a research health scientist at Harry S. Truman, have been working for years on perfecting the bombesin peptide, turning it into a cancer-finding machine that can ferret out not only large, aggressive tumors, but smaller, more discrete growths as well.

"When you talk about prostate cancer, you tend to think that it can kill the patient," says Smith. "It doesn't. What kills the patient is the metastatic disease, which occurs as the cancer spreads to other parts of the body. Bombesin peptides can find those metastases, and target them without damaging other cells in the body."

What's more, bombesin can already be programed to hunt for multiple cancer types, besides prostate, such as breast, pancreatic, and lung cancers.

The gold, for those who are curious, eventually ends up in the liver, where it will remain, benign, for the rest of a patient's life, a life Kannan and his colleagues hope will be significantly longer thanks to a bit of gold dust and a tiny European toad.

The research was supported in part by a VA Merit Review Award, a Research Career Scientist Award from VA Biomedical Laboratory Research and Development, and the Michael J. and Sharon R. Bukstein Chair in Cancer Research at the University of Missouri.