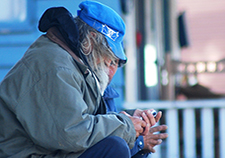 In a survey of homeless Veterans in Massachusetts, nearly all owned a mobile phone, and nearly all expressed interest in receiving calls or texts about appointments and other health matters. (Photo courtesy of www.jenx67.com)

In a survey of homeless Veterans in Massachusetts, nearly all owned a mobile phone, and nearly all expressed interest in receiving calls or texts about appointments and other health matters. (Photo courtesy of www.jenx67.com)

Homeless. The word evokes images of sleeping on broken-down cardboard boxes, of struggling to stay warm on winter nights and panhandling for food money. Mobile phones and Internet, not so much. Yet research shows that not only do people who are homeless often have access to mobile technology, but that in many cases they are making it a priority.

Among people who are living on the streets, estimates of mobile phone ownership hover around 50 percent, says Dr. Keith McInnes, a research health science specialist at the VA's Center for Healthcare Organization and Implementation Research in Bedford, Mass. McInnes, who cautions that it is notoriously difficult to capture the full range of people who are homeless, recently reported his findings from a survey on mobile phone use, conducted in a sample of Veterans experiencing homelessness.

The results, published in the journal Telemedicine and e-Health in September 2014, suggest that mobile phones may represent a new communications channel for important health data to and from Veterans who are homeless and enrolled in VA.

McInnes, also an assistant professor at the Boston University School of Public Health, focused on a population of 106 Veterans in a variety of homeless programs in Massachusetts. "These were people making a concerted effort to improve their lives and reduce the chaos," says McInnes. Surprising to many, 89 percent of the respondents owned a mobile phone while 76 percent said they used the Internet. Of those with a mobile phone, 71 percent said they used text messaging.

"When you think about it, for people who have very little, if you can have one important possession, why wouldn't it be a phone?" asks McInnes. "It might cost $30 to purchase and $30 per month to keep, but it's portable and it gives you a sense of identity and a method of communicating with the world."

McInnes and his team wanted to see if Veterans would be interested in receiving calls and texts from VA health care providers. The response was overwhelming. Nearly all the participants were interested in receiving mobile phone reminders about upcoming medical appointments, or an outreach call or text for those who had not been seen in clinic for a long time. The findings, according to McInnes, point to another viable method for communicating with an often difficult-to-reach population of Veterans.

"It goes along with VA's increasing emphasis on patient-centered care," says McInnes. "The old model where you're only open from 8 to 5 for appointments is kind of disappearing. That doesn't serve the patient well."

Benefits to Veterans, VA, and taxpayers

Government programs to provide free mobile phones and free minutes to low-income populations, and the emergence of a younger, tech-savvy group of Veterans, mean an increase in communication opportunities for VA. "If a Veteran wants to get phone advice at 9 at night or a text at 6 a.m. to remind them to take their medicine, then why not," says McInnes.

According to McInnes, improved communication benefits not only the Veteran, but also the VA system and the taxpayer. "If we can use these technologies to encourage Veterans to better self-manage their chronic conditions and to come in for care early, as opposed to waiting until things get really bad, then we'll be able to reduce emergency room visits, hospitalizations, and even appointment no-shows."

And McInnes sees more opportunities on the horizon for an integrated mobile network between VA and homeless Veterans. "It could help with isolation, potentially even with addictions, as far as putting people in touch with peer support or reminding them of an AA meeting. It could even help notify Veterans during flu season by indicating where, and what hours, to get a flu shot," he says. "It's not a fix-all by any means, but this could be an important part of the way we communicate with and engage low-income and other vulnerable Veterans."