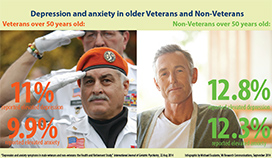 Physical health problems, transitions out of the work force, changes in family roles, the loss of family members and longtime friends—these and other factors put older adults at greater risk of depression and anxiety, compared with younger people.

But what if that older adult is also a Veteran?

A study of nearly 7,000 men aged 50 or older found that Veterans were no more likely than non-Veterans to have depression or anxiety. The results were published online Aug. 22, 2014, in the International Journal of Geriatric Psychiatry.

"Veterans, particularly those who served in combat, generally experience more stress and trauma compared with non-Veterans," write Dr. Christine Gould, a psychologist with the Geriatric Research, Education, and Clinical Center at the Palo Alto VA Healthcare System, and Dr. Sherry Beaudreau, a research health scientist at the Sierra Pacific Mental Illness, Research, Education, and Clinical Center, also based at the Palo Alto VA. "Given what we know about the role of lifetime stress in depression and anxiety, we expected to see higher rates of depression among Veterans."

Instead the researchers found just the opposite. Older Veterans actually scored better than non-Veterans in the same age group.

To get to those numbers, Gould, also a postdoctoral scholar, and Beaudreau, an associate professor of psychiatry and behavioral sciences at Stanford, examined data on 6,557 men aged 50 and older who completed a 2006 health and retirement study. Forty-nine percent of the participants were Veterans.

During the 2006 study, participants completed an eight-item depression screen. Anxiety was assessed using five items from the Beck Anxiety Inventory, which asks participants to rate how frequently they feel the following symptoms:

The differences between the groups were not statistically significant.

"Contrary to expectation, no significant differences in rates of elevated depression and anxiety symptoms were found for Veterans versus non-Veterans," say the authors.

Compared with other generations, Vietnam Vets may be at higher risk

One striking contrast did emerge when the researchers looked at different generations within the Veteran sample. When analyzed by era of service, the data showed that Vietnam Veterans were twice as likely to have elevated depression and anxiety, compared with World War II or Korean War Veterans. Gould and Beaudreau suggest further studies are in order to identify why Vietnam Veterans have higher levels of depression and anxiety than their fellow Veterans from other eras.

"It may be reflective of [a] different military experiences," they write. "Social support also plays a mediating role...which could account for differences in that Vietnam Veterans had less homecoming support compared with other Veterans."

Overall the results run counter to previous studies that found Veterans were twice as likely as non-Veterans to suffer from depression. "Veterans in our study were from the general community, whereas those in prior studies were recruited from the VA health care system, say the authors. "They may have had more severe disabilities, lower incomes, and higher rates of hospitalization than those not using VA care."

Overall only about 25 percent of Veterans use VA care. Gould and Beaudreau suggest that future studies include VA users and non-users, as well as younger Veterans, to get a fuller picture of the mental health differences between Veterans and non-Veterans.