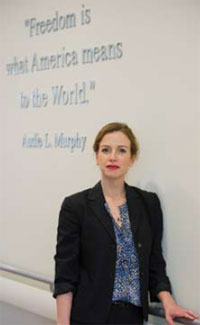 The word "anthropologist" may conjure images of researchers trekking through tropical jungles or mountain villages to explore exotic, faraway cultures. But the work of medical anthropologist Erin Finley, MD, MPH, has taken her to one of the United States' hubs for military personnel and Veterans: San Antonio.

Finley is an investigator with the Veterans Evidence-based Research Dissemination and Implementation Center (VERDICT) at the South Texas Veterans Health Care System. She is also an adjunct assistant professor of clinical epidemiology at the University of Texas Health Science Center at San Antonio.

What brought her to Texas in 2006 was the desire to learn more about posttraumatic stress disorder among the men and women returning from Iraq and Afghanistan. She had previously studied trauma—and its link to physical and mental health—in diverse settings, ranging from Guatemala and Northern Ireland to drug clinics in the southern U.S. Now the focus was on Veterans.

Her extensive interviews and other research resulted in the publication of a book: Fields of Combat: Understanding PTSD Among Veterans of Iraq and Afghanistan (Cornell University Press, 2011).

The following Q&A with Finley is based on an interview she did with fellow anthropologist Daniel Lende, PhD, and Finley's own blog posts. The full interview is available at http://blogs.plos.org/neuroanthropology and has been adapted with permission.

What is the overall theme of the book, and what was your aim in writing it?

The book is built around Veterans' own stories of combat and its psychological aftermath. But Fields of Combat then goes on to put those experiences into social and cultural perspective, examining the history of PTSD, military and VA responses to PTSD, and how Veterans negotiate complex and often contradictory cultural messages around PTSD in making decisions about treatment-seeking and recovery. The goal is to put PTSD into context for a wider audience.

You've said the book examines "a revolution that has been ongoing over the past several years in the PTSD treatment provided by VA." Could you explain?

For many years, much of what was widely understood about PTSD—our cultural ideas about PTSD—was influenced by the fact that the clinical and research communities had not yet developed the scientific knowledge to understand what causes PTSD, how it works within the body and the mind, and how best to treat it. As a result, PTSD was thought of as a chronic and disabling illness for which there was no cure. Now that has changed. We have very good treatments available for PTSD, and VA has worked to make those treatments available at facilities all over the country. Even so, many Veterans simply aren't aware that it is possible to recover from PTSD and so may remain hesitant to reach out for help. By understanding how our cultural messages around PTSD have been shaped by its historical legacy, it becomes easier to understand much of the stigma surrounding the illness and the day-to-day impact this has on Veterans' coping and treatment-seeking behaviors.

Tell us how you developed the material in the book—the Veterans' stories, for instance.

My fieldwork was an incredible experience. I settled on San Antonio as a research site because the city has such a large population of Veterans and active duty Service members. My methods included semi-structured interviews and structured surveys conducted with a variety of Veterans, including males and females from all branches of services, Veterans of Vietnam and the first Gulf War as well of Iraq and Afghanistan, and Veterans who had been diagnosed with PTSD as well as those who had made a very smooth transition back into civilian life.

I also had the opportunity to interview family members and clinicians and community service providers working with active duty Service members and Veterans, and to [observe] events throughout the San Antonio area. The end result was a portrait of PTSD that was kaleidoscopic and complex, and which revealed that there is no one way of viewing or experiencing post-traumatic stress. The task then became how to convey that complexity to the reader, and the best way seemed to be to let Veterans and other participants speak for themselves as much as possible.

What is the book's take-home message? What actions do you think need to be taken?

There are two steps in particular that we should take, both of which require a shift in the cultural messages circulating around what PTSD is and what it means.

The first step requires shifting the cultural dialogue around PTSD, which for many years has been largely negative. PTSD has developed a reputation for being chronic and disabling, in part because for many years we simply didn't have the knowledge base required to treat it effectively. Now that we have solid evidence for the effectiveness of treatments like prolonged exposure therapy and cognitive processing therapy, it is important to begin shifting the messages around PTSD to reflect the fact that it need not be a lifelong illness.

We would never expect someone who has been through a trauma to be the same afterwards as he or she was beforehand—just as we would never expect that anyone who has been through any experience of great suffering would remain unchanged—but with proper treatment, someone with PTSD can look toward much-improved quality of life and even full recovery within a relatively short period of time.

The second step requires shifting the way that many of us think about people living with PTSD, who still encounter the stigma of being thought cowardly or weak. It's sort of bizarrely ironic when you think about it, given that individuals with PTSD are those who have been through some of the most extreme and horrifying circumstances in human life—and have survived. Far from being weak, they have often proven themselves to be heroes, to be truly extraordinary people. The more we recognize the strength of trauma survivors and provide them with the kinds of treatment and support that make the most of that strength, the more likely we are to see positive coping and care-seeking and real recovery for the majority of those affected.