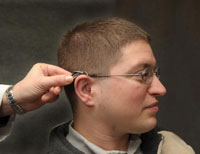 Army Veteran Louis Lamp wears an earpiece that is part of a frequency modulation system that helps him hear speech more clearly in noisy settings. (Photo by Michael Moody)

Army Veteran Louis Lamp takes part in computer training that was part of a VA study on treatments for central auditory processing. (Photo by Michael Moody)

Before he was deployed to Iraq in 2003, Louis Lamp loved to play the violin and write music. When he came home after his tour, the Army Veteran found himself struggling to regain his musical ability. He couldn't hear the way he used to.

While in Iraq, he had been close to many blasts from mines, mortars, and rocket-propelled grenades, which probably caused a mild traumatic brain injury (TBI). As a gunner in a Humvee, and an occasional passenger in a Chinook helicopter and C-130 cargo plane, he was exposed to dangerously high noise levels.

Lamp is among some 225,000 Veterans of Iraq and Afghanistan who have some form of blast-related TBI. About two-thirds of these Veterans report difficulties with hearing. Some have physical damage to their ears and obvious deficits in their hearing; others do not. In fact, many have "normal hearing." That is, they can detect soft tones when given a hearing test. At the same time, something goes awry as the brain interprets sounds. And this can cause an array of subtle—and frustrating—functional problems.

These Veterans typically have trouble understanding people who are taking fast, or amid background noise. They may report having difficulty following instructions or long conversations. Some are also hypersensitive to loud sounds and many have tinnitus—ringing or buzzing in the ears.

Lamp says he would get exhausted in social situations because he had to exert a lot of effort to listen and needed to lip-read.

Treating these central auditory processing problems can be challenging. But a recent VA clinical trial highlighted two approaches that appear to be effective, especially when used in combination.

The study took place at VA's National Center for Rehabilitative Auditory Research in Portland, Ore., and at the James Haley VA Medical Center in Tampa. The trial compared two treatments.

In an October 2012 article in VA's Journal of Rehabilitation Research and Development, researchers described a phenomenon known as "dual sensory impairment."

"Combat exposures to blast can result in both peripheral damage to the ears and eyes, and central damage to the auditory and visual processing areas in the brain," wrote authors Gabrielle Saunders, PhD, of VA's National Center for Rehabilitative Auditory Research, and Katharina Echt, PhD, of VA's Atlanta Vision Loss Center.

That second type of damage—to the brain's processing centers—can show up as subtle deficits in attention, memory, communication, and problem-solving. And it can be harder to detect than routine hearing or vision loss. When both hearing and vision are affected, the problem is known as "dual sensory impairment."

According to Saunders and Echt, the number of affected Veterans is "vast." In their article, they recommend a team-based approach to care that incorporates a mix of strategies.

One, a frequency modulation (FM) system, uses radio waves to send signals directly from a microphone held by a talker to an earpiece worn by the listener. The system renders the talker's voice louder, relative to background sounds. FM systems are often used by hearing-impaired people, but this was the first study in which it was used by blast-exposed Veterans.

The second treatment was computer-based training that takes users through tasks that involve following spoken instructions or interpreting sounds. The software, from a company called Posit Science, is designed to boost auditory processing pathways in the brain.

All 86 Veterans in the study all had been exposed to one or more blasts during their deployment. They all had normal hearing but reported difficulties like those described above. About a quarter of the Veterans received only educational counseling, similar to that typically provided in audiology clinics. As part of the counseling, this control group learned communication strategies to help them cope. The others in the study received the same counseling, but in addition one group used an FM system, another did the computer training, and a third received both interventions.

After 8 to 12 weeks, the combination group had the best outcomes. The control group made the least progress, and the other two groups fell somewhere in between.

Researcher Gabrielle Saunders, PhD, says more work needs to be done to improve adherence to the regimens, and to iron out the ideal protocols for individual patients. But in general, she says the combination of the two treatments "appears to be an effective intervention strategy for blast-exposed Veterans with normal hearing who report hearing difficulties." She stresses that audiologists will need to work with patients to "understand the types of interventions they are open to" and that they will likely stick with.

As for Lamp, he received an FM system as part of the study. While he has encountered some glitches with the technology, it has helped him in many ways.

Nowadays he doesn't need to lip-read as much, or at all, so he feels less drained in social situations. His violin sounds to him like it used to, which has boosted his confidence for playing and composing.

The system also has restored parts of the Veteran's life that he hadn't realized were lost.

For example, "I'd gotten used to hearing rain as a dull thudding," he says. "I was in the airport recently and it started raining really hard. Using the FM, I was hearing a lot more, and the sounds brought back a lot of memories I hadn't thought of for years. I thought, 'oh, this is cool!'

"My long-term memories are coming back in different ways because of this," he adds, "and I hadn't the faintest idea that it was even an issue."

Findings from the study, supported by VA's Rehabilitation Research and Development Service, were shared in December 2012 at a professional meeting titled "Advances in Audiology: Tomorrow's Solutions for Today's Challenges."