A common 'natural' food additive may be a culprit in chronic disease, says a VA researcher

Dr. Joanne Tobacman, with VA and the University of Illinois, is an expert on carrageenan, a common food additive derived from seaweed. She says it may be a culprit in many chronic diseases. (Photo by Jerry Daliege) 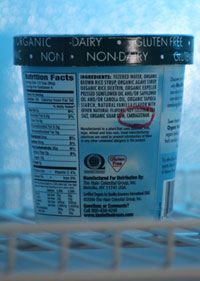 Even many natural and organic food products such as this non-dairy ice cream use carrageenan as an emulsifier. (Photo by Mitch Mirkin)

Unless you make all your food from scratch at home—and who does that anymore?—chances are you've eaten lots of an ingredient called carrageenan. It's a gelling agent—used to improve the texture of processed foods—that's extracted from red algae, a type of seaweed. Look on the label of many desserts, dairy products, infant formulas, lunch meats, and any number of other processed foods, and you're likely to find it. In fact, it's common even in natural products found in health food stores.

The problem is, the thickener may be a hidden culprit in a long list of chronic diseases. That's the view of Joanne Tobacman, MD, a physician-scientist at the Jesse Brown Veterans Affairs Medical Center in Chicago. She has studied the ingredient for some two decades and has addressed the National Organic Standards Board about its safety. Currently, the ingredient is "generally recognized as safe" by the U.S. Food and Drug Administration.

Tobacman first grew wary of carrageenan in the 1990s when she used it in the lab in experiments with human cells. Carrageenan came into use by the food industry as early as the 1930s, and by that time scientists had learned they could use it to cause inflammation.

In Tobacman's lab, the breast cells didn't react well at all to carrageenan.

"When I first used carrageenan in the laboratory, the cells that I was working with, mammary myoepithelial cells, died," she recalls. Since those same types of cells are absent in invasive breast cancer, the finding seemed significant to Tobacman. She went on to study the curious seaweed derivative in more depth.

The findings from dozens of animal studies—in her lab and others—are troubling. The evidence suggests the ingredient may wreak havoc in the digestive tract, causing ulcers and even cancerous lesions. Tobacman has also found that the gum may lead to glucose intolerance and insulin resistance, which set the stage for diabetes. She currently has a grant from the American Diabetes Association to learn more.

Some people are skeptical of animal evidence because they believe scientists load up mice with a chemical at levels way beyond what a human would ever consume, and then claim it causes cancer. Not so here, says Tobacman. She describes her methodology:

"In our studies we have used amounts of undegraded carrageenan [the form used by the food industry] that are lower than anticipated to be consumed in the average daily diet in the United States."

"In the mouse experiments that demonstrated abnormal glucose tolerance and insulin resistance, which are found in diabetes, carrageenan was added to the mouse water supply, and the mice consumed about 50 micrograms per day of carrageenan. They weighed about 25 grams, so consumption was comparable to about 100 milligrams for a 50 kilogram [110-pound] person."

In other words, Tobacman's mice are consuming, per body weight, far less than carrageenan than does the average American.

She hopes her work will lead to changes in practice, both on the part of consumers and food regulators. "The issue has not gotten the public attention that's required," says Tobacman. She notes that carrageenan is still used even in infant formula, contrary to recommendations from a United Nations and World Health Organization group.

In sum, partly because of its propensity to trigger inflammation, carrageenan could be a factor in serious health problems ranging from cancer and diabetes to colitis and arthritis, according to Tobacman.

"I think it's highly possible that carrageenan contributes to the development of a variety of diseases," she says.

While carrageenan may have some special texturizing properties because of its unusual molecular structure and biological reactivity, Tobacman notes that other natural gums used as food additives, such as locust bean, guar and xanthan, have no known health risks.