Tackling homelessness, with a focus on women Veterans 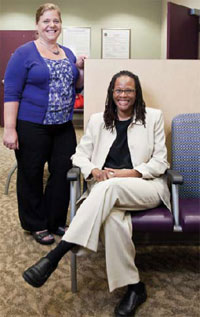 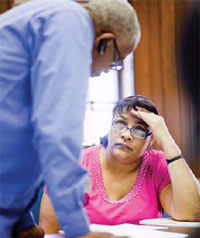 Like all researchers, Donna Washington, MD, MPH, is most impressed by robust data and strong evidence. But every now and then she comes across a simple anecdote that speaks volumes about her subject matter—like this story she heard recently from one of her patients at the Greater Los Angeles VA Healthcare System:

"I have a patient who's chronically homeless," relates Washington. "At one point, she found out about a transitional housing program, but for some reason she wasn't eligible. She told a friend about it—another woman Veteran who was homeless. The friend was able to get into the program. She then lent her car to my patient so that my patient could live in it and wouldn't have to stay on the street."

Washington, who studies women's health and in recent years has keyed in on the issue of homelessness, says the story is a prime example of how Veterans lean on each other for support, especially when they are facing homelessness. "It shows how people share resources and knowledge, how they look for support among each other and try to make it all work. The peer support that women Veterans give each other is tremendous. It's a resounding theme in the work we've done."

Washington didn't set out to study homelessness. But her work as a physician caring for women Veterans and her studies on women's health have led her in that direction. Based in Los Angeles, which has one of the nation's largest concentrations of homeless people, she has seen hundreds of patients struggling with homelessness—or at risk for being on the street.

Women Veterans are up to four times more likely than civilian women to experience homelessness. Washington's research group—including Alison Hamilton, PhD, MPH, who led the analysis of focus groups of nearly 30 homeless women Veterans—has worked to understand the reasons. "We are teasing out what the pathways are in and out of homelessness," says Washington, "and what the relationships are among the various risk factors."

The work is helping VA shape programs and services to keep women Veterans healthy and housed. VA Research Currents spoke with Washington about what her team has learned so far.

RC: Is homelessness first and foremost a result of high rents and low incomes?

DW: That's true, but it doesn't tell the whole story. High rent and low income might be the final common point along the pathway, but there are very different ways people get to that point in time. And it's changed over time.

If you go back a few years, when the economy was somewhat better, substance abuse and mental health issues were very strong and very common risk factors that started people on the path to homelessness. As the economy has worsened, we're seeing more people who may not necessarily have a substance use disorder or mental health issue. They're just unemployed, and the combination of unemployment and high rent leads to a lack of opportunity, and in many cases homelessness.

Why do substance abuse and mental health problems often result in homelessness?

What both conditions have in common is that they are often associated with a lack of social support. People with substance use disorders may become disenfranchised from their family and friends because of their substance abuse and related behaviors. In the same way, people with serious mental illness may become disconnected from society and their social support. They just don't have the family and friends to fall back on. And of course, these conditions are also risk factors for unemployment.

Does it sometimes happen the other way around—that a person develops mental health problems only after being on the street?

Being homeless is a major stressor, and it puts you at risk for trauma. It can lead to posttraumatic stress disorder, which itself is a risk factor for homelessness. So the cycle is perpetuated, and you find yourself asking which came first, the mental illness or the homelessness. Sometimes the pathway is not as clear as what I initially described.

For women, how big a risk factor is military sexual trauma?

Military sexual trauma occurs in both men and women, but women are far more likely to experience it. We looked at whether military sexual trauma, or sexual trauma in general, is a risk factor for homelessness, and we found it indeed is. In our case-control study comparing homeless and housed women, we found that once you controlled for other differences between the two groups, experiencing sexual trauma during military service made the women four times more likely to become homeless. Even if it's not the greatest risk factor, it does differ between women Veterans and non-Veterans. So it can help explain the relatively high rates of homelessness among women Veterans compared with non-Veteran women.

If a woman Veteran becomes homeless many years after her service, does that suggest that the military experience itself has little to do with the situation?

We did focus groups to understand this dynamic. We often heard about delayed effects of military service. One Veteran, for example, talked about being assaulted in the military, but her PTSD symptoms related to that didn't emerge until much later.

Also, it's important to note that if people have PTSD that goes untreated, they're certainly at risk for delayed recurrences of their symptoms throughout their lifetime. And that can make it difficult for them to stay employed, which can ultimately lead to homelessness.

The classic image of the homeless person is someone living on the street—in a cardboard box, under a bridge, in the woods or a park, perhaps in their car. But that's often not the reality, as there are various temporary housing situations that homeless people might find, even if they are only short-term and tenuous. Is that true especially for women?

We're planning to collect some data on that, but anecdotally I can tell you that it's absolutely true for most of the women Veterans I see who are experiencing homelessness. I have a large proportion of women who are homeless in my primary care patient panel, and most of them have found alternatives to being on the street. Unfortunately, some of these choices include staying in abusive relationships and being the victims of domestic violence. But many of them stay in these unsafe relationships to keep themselves—and in many cases their children—from being out on the street. Other women might double up or "couch surf" with various family members or friends, which may be a safer environment, but it doesn't necessarily provide long-term stability.

Do many of these women cycle in and out of homelessness?

Absolutely. In our research with women Veterans who have been homeless, the participants reported an average of four cycles in and out of homelessness during their lifetime. So what this teaches us is if you focus your efforts only on those who happen to be literally out on the streets, you are going to miss a larger population who are at risk and who will end up on the street as soon as they lose their job and their tenuous circumstances deteriorate. That's been the impetus behind much of my current work—to identify those who are vulnerable, and try to prevent their becoming homeless.

What special challenges do women with children face?

Not surprisingly, women who are homeless are more likely than men to be primary caretakers for children. And that means the housing options are more restricted than if they were just on their own. Even situations that do accept families—say, some shelters—might not be a safe option for the children. So women make different choices if they have children, in an effort to safeguard them.

In our focus groups, we've heard women talk about channeling their income into ensuring their children had a place to stay, even if it meant they themselves would be homeless and couldn't stay with their kids. Those with children tend to absolutely place the safety and well-being of the children first.

Do you see many women who are homeless but whose appearance and demeanor doesn't give any indication of their situation?

What I've discovered through focus groups is that not appearing to be homeless is a protective factor. If you appear vulnerable, if you appear homeless, that increases your risk of being victimized, and women know that. So what we've seen is that women Veterans who are homeless try to make their homelessness invisible.

So we know we can't just look at a woman who's coming into the VA and make assessments based only on appearance. If we do that, we're going to miss a good number of people who are homeless and who could benefit from VA services in this area.

Part of your research involves screening women who come to VA for care. Tell us about that.

With funding from the Women Veterans Strategic Healthcare Group and the Quality Enhancement Research Initiative, we've been testing a tool, or brief questionnaire, to be used in screening patients for vulnerability for homelessness. It's not specific to women, but it includes risk factors that are much more common or important in women than in men, such as military sexual trauma.

Overall, based on your findings to date, how do you think VA can best help women Veterans—and perhaps all Veterans—avoid or get out of homelessness?

I think the paradigm of Housing First [an approach that aims to provide housing first and then other services as needed], which VA has been strongly promoting, is an excellent one. In my research as well as anecdotally in my practice, when I think about the priorities of people who are homeless, first of all they need a safe place to stay. That will allow them to address some of the other issues that may have led to their homelessness. So Housing First works, but what we need is the expanded capability to serve more homeless Veterans. We also need to recognize that there may be gender differences in the risk for homelessness, and also think about how to tailor programs for Veterans who are on the brink of homelessness but not there yet.