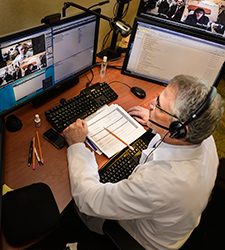 VA's intensive care units provide acute care for patients with the most severe and life-threatening illnesses and injuries. But with nearly 40 percent of America's Veterans living in areas designated as rural, staffing those ICUs with highly trained intensivists can be problematic.

Enter VA ICU telemedicine, which connects rural ICUs with regional support centers staffed by specially trained nurses and doctors, all of whom are plugged into how patients are doing, even if those patients are hundreds of miles away.

The system connects experienced intensivists—physicians specially trained to work in ICUs—and critical care nurses to rural ICUs on a nearly 24/7 basis. These remote specialists have real-time access to patient vital signs, intravenous infusion rates, and ventilator settings. High-speed video and audio connections connect the ICU and even patient rooms to the support center. There are even video monitors in patient rooms that allow remote interaction between bedside staff, patients, and the virtual caregivers.

"Research has shown the presence of intensivists within ICUs has a positive impact on patient outcomes," says Dr. Jane Moeckli, co-investigator at the Iowa City VA Health Care System. "But there aren't enough to staff ICUs, not just in the VA system but nationally. ICU telemedicine was developed to address that by having intensivists and critical care nurses provide assistance with patient-monitoring and management, either continuously or at night or on the weekend when fewer physicians are available."

But while past research may have shown the positive effect intensivists can have on patients, results are mixed on the impact of ICU telemedicine systems on patients and staff.

Moeckli wondered if the teamwork that is essential in ICUs extended to the ICU telemedicine support center staff, and what effect that had on when and how the system was used. She led a study on the issue and shared her findings in March 2015 at the annual meeting of the Society for Applied Anthropology.

"Patient care in ICUs is inherently team-based," says Moeckli. "Communication and coordination are extremely important, and just as in the case with intensivists, poor teamwork has been shown to affect patient care."

Are virtual caregivers perceived as part of the team and critical to patient care, or are they seen as a sort of Big Brother or extra bureaucratic cog in an already complex system? For that matter, what does teamwork look like with the addition of virtual clinicians hundreds of miles away?

To find out, Moeckli and a team of social scientists interviewed 124 physicians, administrators, nurses, and other staff at seven ICUs and an ICU telemedicine support center. They also spent more than 60 hours on-site, observing how operations were conducted in five of VA's ICUs and at a support center.

In theory, says Moeckli, the virtual ICU should work like this: Intensivists and critical care nurses at a remote location are fed data on patients and kept up to date through regular briefings. In a way, they act like consultants, providing expertise ranging from second opinions to collaborative care, depending on the need.

Decisions by telemedicine intensivists are based almost solely on the physical data collected from the patient, outside of the unique emotional, physical, and mental demands of the ICU.

"They tend to have a different view of the patient because they're dealing with data and don't have their hands on them. It's a whole different way of conceptualizing the patient's status," says Moeckli.

The focus on data-driven care doesn't end with videoconferencing or telephone calls. VA's ICU telemedicine software has algorithms designed to detect when a patient might be deteriorating—potentially even before local staff can detect the changes. Ideally, this leads to earlier interventions and better patient outcomes.

Although the results of her study are still preliminary, Moeckli has identified several important themes related to teamwork and ICU telemedicine implementation. Even as awareness and understanding of the ICU telemedicine system grew, the new model care was, as Moeckli puts it, "still being negotiated clinically and socially." Opinions varied. Some local staff saw the remote team as co-workers. Others viewed them as less than "real" critical care clinicians, because they don't do hands-on work with patients.

How ICU staff members described the relationship varied from person to person rather than from site to site, suggesting institutional culture played less of a role than expected.

"A lot of it came down to the physicians and how they interacted with the intensivists," says Moeckli. "Leadership support was necessary but not sufficient. If physician buy-in wasn't there, then efforts to formalize these relationships by incorporating the support center staff in the local team process weren't as successful."

Thirty-one of VA's 173 ICUs currently receive ICU telemedicine support. The program also has the authority and funding to expand.

Moeckli hopes her research, and the lessons it has generated on teamwork and virtual ICUs, will help to better inform ICUs in implementing and coordinating these virtual relationships.

She says, "It is a new model of care, and for teams accustomed to having autonomy, that can be disruptive. A multipronged approach including training and process and policy change, alongside efforts to build relationships between teams, is critical for this to work."