Despite evidence, many Veterans with PTSD hesitant to try psychotherapy 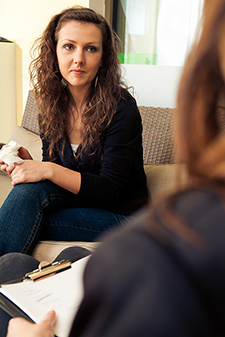 A VA study has examined why many Veterans with PTSD are hesitant to start psychotherapy. (Photo: ©iStock/Nullplus)

A VA study has examined why many Veterans with PTSD are hesitant to start psychotherapy. (Photo: ©iStock/Nullplus)

Numerous studies have borne out the effectiveness of evidence-based psychotherapy in treating posttraumatic stress disorder. Studies suggest that Veterans with PTSD who go through these therapies have better outcomes than those who receive other treatments or no treatment at all. To that end, VA has a policy mandating that cognitive processing therapy or prolonged exposure be available to every enrolled Veteran with a primary PTSD diagnosis.

But not every Veteran with PTSD takes advantage. An estimated 500,000 Veterans receive PTSD treatment at VA medical centers or clinics nationwide every year. Of those treated in VA's special PTSD clinics, only around 6 to 13 percent receive evidence-based psychotherapy. The rest generally are given medication or undergo talk therapy or other treatments. The disconnect, according to a new VA study, lies partly in the availability of the therapy, and partly in how Veterans perceive it.

The study, published online in Psychological Trauma on April 27, 2015, examined the perceptions of 23 Houston-area Veterans with PTSD diagnoses who underwent evidence-based psychotherapy between May 2012 and September 2013.

Psychotherapy rates are low in general

"Psychotherapy rates are low in general. They're actually even lower outside of VA," says Dr. Natalie Hundt, a research psychologist at the Michael E. DeBakey VA Medical Center in Houston. "On top of that, both of the PTSD therapies VA focuses on are trauma-based therapies, meaning the patient would have to discuss details about the traumatic event that happened to them."

By discussing the actual traumatic event, says Hundt, patients get to the root of the issue, whereas other therapies tend to focus more on mitigating or coping with symptoms. For that reason, she says, trauma-focused psychotherapy is often the better option.

At the same time, she acknowledges that "patients can be very reluctant to discuss what happened. They have the attitude that the trauma is something they're trying to forget and by bringing it back up they'll only make it worse."

That reluctance to engage, combined with a lack of buy-in on the effectiveness of psychotherapy, can make it a hard sell to Veterans already struggling with other barriers to care. They may be reluctant to seek treatment due to a perceived stigma around mental illness, or because they live in rural areas and would have to travel too far. Many have full-time jobs or young children that make it difficult to find time for mental health treatment.

"But beyond all that are Veteran fears that they'll break down or fall apart and lose it if they talk about these experiences," says Hundt.

That, says Hundt, is unfortunate because according to the research, evidenced-based psychotherapy works better at treating PTSD than other available treatments, plain and simple.

"It helps patients live their lives. Trauma-focused treatment helps patients gain the skills and abilities to re-engage in the lives they had before these traumatic events. It's more difficult than just taking medications," says Hundt, "but the thing with medications is they work while you're on them but when you stop, the symptoms come back. The benefits of psychotherapy continue on for years."

For the study, Hundt contacted Veterans with PTSD diagnoses who had undergone evidence-based psychotherapy. Twenty-three responded and several common themes emerged. One was the aforementioned initial aversion to care. "One of the primary symptoms of PTSD is avoidance, so it wasn't surprising to see how many of these Veterans felt avoiding talking about or confronting their trauma was actually a helpful or positive coping mechanism," says Hundt.

"I remember thinking, 'That may break me and I don't want to be broken so I can't,'" reported one female Veteran with military sexual trauma.

Another participant, a Vietnam Veteran, thought reliving the traumatic event would make him feel worse. "If you bring up bad thoughts for me, now I'm worse off than when I came in the door...Like if you said something to the effect of "you might have had time to save [a friend],' oh man, what did you just do?"

Several participants said that at first, before entering treatment, they were skeptical about how effective psychotherapy would be at helping their PTSD. Overall though, most reported positive experiences and major improvements in symptoms as a result of psychotherapy. Hundt is currently working on another paper focused on how effective the treatments were for the participants.

Avoidance and skepticism are to be expected, particularly in a population that tends to be hypervigilant and wary. The key to getting more Veterans into psychotherapy treatment, according to Hundt, lies in a subject taught more often in business school than medical school: marketing. "We have to sell ourselves and the treatment we provide," Hundt says.

Overall, only 52 percent of the participants in her study were referred to treatment by a therapist—and these were people already actively seeking treatment at a VA PTSD clinic. The rest learned about the programs through word of mouth from other Veterans or other medical providers who don't provide these types of therapy.

That, says Hundt, is another important piece of the puzzle.

"Do our primary care doctors and psychiatrists know enough about these treatments to get the word out to the Veterans they see? We need to be creative. Whether that's word of mouth, partnering with VA's peer support providers, or some other means to let them know what's available," says Hundt. "It's a fine line. We don't want to push them into something they don't want to do, but we also need to encourage them to not let their fears get in the way of their treatment."