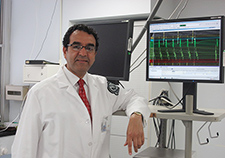 Dr. Mohamed Boutjdir's team discovered how a rare but potentially deadly cardiac disorder can develop in people with autoimmune diseases such as lupus or rheumatoid arthritis. (Photo by Claudie Benjamin)

Dr. Mohamed Boutjdir's team discovered how a rare but potentially deadly cardiac disorder can develop in people with autoimmune diseases such as lupus or rheumatoid arthritis. (Photo by Claudie Benjamin)

The abnormal heart-rhythm condition known as Long QT syndrome is rare, but it can cause sudden cardiac death.

Now, an international team involving researchers at the VA New York Harbor Healthcare System has shown how the disorder develops in specific patients—those who have an autoimmune condition such as lupus or rheumatoid arthritis.

The findings appeared online May 20, 2015, in Circulation, published by the American Heart Association.

The discovery, made using blood serum samples from patients and heart-muscle cells, revolves around anti-SSA/Ro antibodies. Normally, antibodies identify and neutralize invaders such as bacteria and viruses. Anti-SSA/Ro antibodies, though, attack the body's own connective tissue. They are generally found only in people with certain autoimmune conditions. Doctors look for them in blood tests used to diagnose those conditions.

According to the new research, these antibodies interfere with the heart's electrical system, blocking the action of a protein within the heart—a cardiac "channel"—that helps regulate the balance of potassium.

"We found that these anti-SSA/Ro antibodies, which are picked up on lab tests and found in adult patients with connective tissue diseases, actually block a specific cardiac channel called the HERG channel," explains senior study author Dr. Mohamed Boutjdir. "This prevents potassium ions from going out of the cell and results in an abnormal ECG—specifically, a long QT."

Boutjdir, based in Brooklyn, N.Y., directs the Cardiovascular Research Program at the VA New York Harbor Healthcare System. He is also a professor at Downstate Medical Center. Working with his VA team on the study were colleagues from other U.S. universities and from Italy, Sweden, and Canada.

Long QY syndrome is named for a certain phase of the heart's electrical rhythm—the time it takes for the system to recharge after reach heartbeat. People with the disorder are at risk for palpitations, fainting, and even sudden death, due to what's known as ventricular fibrillation. The lower chambers of the heart quiver and the heart is unable to pump blood, causing cardiac arrest.

"Long QT syndrome can be inherited, due to abnormal genes, or it can be acquired, often due to medication side effects," explains Boutjdir.

He and his coauthors, based on the new findings, recommend strongly that adults known to have anti-SSA/Ro antibodies undergo preventive ECG screening, to detect if their QT interval is longer than normal. If they do screen positive, that may be a sign they need to alter their medications.

Boutjdir adds, "We hope these findings and our recommendations help prevent serious cardiac consequences for those with autoimmune diseases."