When every minute counts 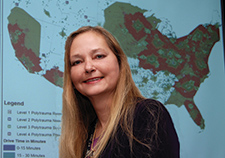 Dr. Diane Cowper Ripley has led a number of VA studies looking at the role of home location and distance from VA facilities on the care that Veterans receive. (Photo by Greg Westlye)

Dr. Diane Cowper Ripley has led a number of VA studies looking at the role of home location and distance from VA facilities on the care that Veterans receive. (Photo by Greg Westlye)

It may confirm the obvious, but a recent study on stroke outcomes underscores the challenges VA faces in providing health care for Veterans in rural areas.

The study found, not surprisingly, that the more time it took Veterans to travel to a VA emergency room, the more likely they were to die in the hospital following the stroke.

The results appear in the June 2015 issue of the journal Medical Care.

Lead author Dr. Diane Cowper Ripley says it's possible that factors other than travel time that were not tracked in the study could help explain the finding.

"Even so," she says, "this association should be investigated further."

Cowper Ripley, based at the Gainesville (Fla.) VA Medical Center, co-directs VA's Center on Disability and Rehabilitation Research. She specializes in geographic barriers to care.

The study looked at more than 10,000 stroke cases that occurred during fiscal years 2007 and 2008. The researchers used computer models to estimate travel time from each Veteran's home to the treating VA hospital.

About 4 percent of the Veterans—430—died during their post-ER hospital stay. The researchers determined that when patients had to travel 90 minutes or more to get to the ER, they were nearly 50 percent more likely to die in the hospital, compared with cases involving under 30 minutes of travel time.

In a stroke, blood flow to parts of the brain is cut off, usually by a clot. Experts estimate that nearly two million brain cells die every minute the stroke goes untreated. Hence the well-known public-health message "Time lost is brain lost."

The gold standard stroke treatment is known as tPA, for tissue plasminogen activator. Usually given through an IV in the arm, the drug dissolves clots and helps restore blood flow to the brain. But it generally has to be given within the first three hours after the onset of the stroke. In many cases, patients or those around them don't realize at first that a stroke is occurring, and they may not set out for the hospital or call 911 until an hour or more has passed.

In the study, the researchers did not adjust for receipt of tPA. But presumably even when Veterans did arrive at the hospital in enough time to receive the treatment, they still fared worse if they had longer travel times.

Cowper Ripley's group did adjust for several other factors, including markers of stroke severity and patients' other medical conditions, to try and isolate the effects of travel time.

The issue of where Veterans get their care—including in emergencies—is complex, and VA researchers have looked carefully at the issue and documented various patterns. One goal is to identify opportunities for VA to adjust policies or seek new strategies to help Veterans get timely, high-quality care.

About 4 in 10 VA patients live in rural areas. VA has extended its reach to these regions in recent years through building more community-based outpatient clinics, using telemedicine, and contracting as needed with non-VA providers. But researchers continue to identify gaps.

Even before the passage of the Veterans Access, Choice, and Accountability Act of 2014, which expanded Veterans' options for non-VA care, VA would pay for emergency care in certain cases. But it is possible some Veterans or the people driving them may still head toward VA in an emergency.

"It may well be that some Veterans or their family members are not aware of the legislation that allows VA to pay for non-VA care under certain emergency situations," says Cowper Ripley, "and as a result they may be worried that they will be financially liable for ER care outside VA."

She says her study did not ascertain if any of the Veterans actually did bypass a nearer ER in order to go specifically to a VA hospital.

"We mentioned in the [journal] article that we didn't know whether a closer non-VA hospital might have been bypassed, and this is one of our study's limitations, and certainly something we would like to look at in future research," says Cowper Ripley. "This would require finding the data on non-VA emergency rooms, layering it on a map, and using [Geographic Information System] tools to determine the distance and travel time to the nearest facility and whether it was a VA or non-VA hospital. It would be an interesting area of inquiry."

In any event, Cower Ripley says stroke care is one area where VA is already probing how to further expand options for Veterans.

"One idea that is already under consideration," she notes, "is possibly partnering with non-VA stroke centers in areas where VA capacity is low."

One of the variables her study tracked was the level of overall medical care offered at the VA medical center where the patient was treated. Some VA sites are considered "Complexity 1," with more specialists on hand and more teaching and research. Again not surprisingly, the study showed that stroke patients fared better when they received their emergency and immediate follow-up care at such facilities.

It also turns out, as one might expect, that higher-complexity VA sites tend to be located in urban areas. This is another facet of the medical obstacles facing rural Veterans. It also mirrors the challenges of rural Americans in general.

Traveling in an ambulance versus a private vehicle

Another factor in stroke care is not how many minutes away the patient is from the ER, but how he or she gets there.

According to one national survey, only about half of stroke patients use emergency services to get to the hospital. The new VA study didn't track how each Veteran arrived at the hospital—whether in a family member's car, say, or in an ambulance—but presumably the figure would be in line with the past research.

"You would think that the vast majority of stroke patients arrive by ambulance, but sometimes in an emergency, people feel that time is being lost by waiting for an ambulance to arrive," says Cowper Ripley. "And so a family member or neighbor might feel it would be quicker to drive the person to the hospital themselves."

She says generally, it's a good idea to call 911. That may not be an option for a Veteran who lives on an isolated farm or ranch, many miles from even the nearest rural fire department, but people should use the option whenever feasible, urges the researcher.

"Among other benefits of emergency services," she says, "emergency responders can call ahead to the hospital. This can result in shorter times to be evaluated by the ER team and shorter times to brain imaging." Importantly, this can also boost the chance of getting potentially life-saving tPA, with its short window of opportunity.

Cower Ripley adds, "The American Stroke Association has for decades stressed the importance of calling 911 and continues public education on the importance of doing that if a person is experiencing stroke symptoms."

The American Stroke Association and American Heart Association use the acronym "FAST" to teach people the signs of stroke:

Face Drooping—Does one side of the face droop or is it numb? Ask the person to smile. Is the person's smile uneven?

Arm Weakness—Is one arm weak or numb? Ask the person to raise both arms. Does one arm drift downward?

Speech Difficulty—Is speech slurred? Is the person unable to speak or hard to understand? Ask the person to repeat a simple sentence, like "The sky is blue." Is the sentence repeated correctly?

Time to call 911—If someone shows any of these symptoms, even if the symptoms go away, call 911 and get the person to the hospital immediately. Check the time so you'll know when the first symptoms appeared.