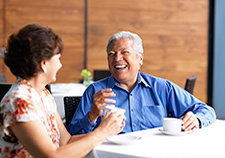 Isolation can be devastating, so much so that many societies use it as punishment—solitary confinement for prisoners, for example. At the heart of it is the fact that human beings are social creatures. Researchers have long known that lack of social contact and the loneliness that accompanies it are risk factors for depression, particularly in older people.

A few hundred years ago social contact would be easy to define—interacting face-to-face with someone. In today's world of virtual connectivity, friends and family can talk or see each other in real time, at any time, regardless of place. Texting, instant messaging, email, Skype, and phone all mean that a friendly face, voice, or message is literally at our fingertips. But is that enough to stave off depression, particularly for older people who may not be fit enough to get out for frequent face-to-face interactions?

New research suggests that technology can't beat an old-fashioned in-person gab session. A VA study presented at the 36th Annual Meeting and Scientific Sessions of the Society of Behavioral Medicine in April 2015 found routine in-person contact could substantially reduce the risk of depression for older adults. And generally speaking, the more such contact, the better. Written correspondence—including email—did not have the same effect. Nor did phone contact, although this mode of contact seemed particularly helpful for those with existing depression.

The study is expected to appear later this year in the Journal of the American Geriatrics Society.

The patterns varied somewhat depending on the age group—50 to 69, or age 70 and older. But the bottom line, concluded the researchers, is that "infrequent in-person social contact with friends and family is an important predictor for the development of clinically significant depressive symptoms in older adults."

For Dr. Alan Teo, an investigator at VA's Center to Improve Veteran Involvement in Care and a staff psychiatrist at the VA Portland Health Care System, the study has ramifications far beyond mitigating depression in elderly patients. "We know people who are isolated have all sorts of bad mental health outcomes, not just a higher risk for depression," he says. "And we know social contact acts as a buffer against depression, and not just for older people or people who already have depression, but for everyone."

Teo and colleagues identified more than 11,000 participants based on data from the Health and Retirement Study between 2004 and 2010. The participants were assessed for depression symptoms and, over the course of two years, asked to identify how often they had met up, telephoned, or had some form of written correspondence with family or friends.

On average, the participants talked on the phone a few times per month, mostly with children and family members. The next most-frequent type of contact was in-person meetings, followed by email or other written contact.

One of the strongest findings: For those age 70 or older, the odds of depression were 53 percent lower after two years if they reported having had in-person contact three or more times per week with children. The odds were 48 percent lower if their regular contact was with other family, not children.

"It's interesting to note that the positive effects we found were tied to contact with friendsfor those under 70," says Teo. Participants over aged 70 benefited more from contact with family.

Regardless of whom they were contacting, or how, what was clear was that the participants used a variety of methods to communicate. "In a way it was good news," says Teo. "People weren't just shutting themselves up and using email or [other] written correspondence. They haven't shunned meeting in person."

The take-home message, says Teo, is that "older Americans should think about specifically incorporating in-person contact with other people. In a way, social contact is like a medicine or a vitamin. It's enjoyable and, as it turns out, it's good for us."

Teo notes that he specifically used the term "in person" in his research, rather than "face to face," because he realized that "face to face" could include things like FaceTime or Skype, which allow friends or family to see each other and talk even when thousands of miles apart.

"In future research," he says, "I'd like to ask about the use of these specific technologies. My hypothesis is that they would offer some benefit for depression prevention, more modest than in-person but still better than the lack of benefit we saw with the telephone alone."