Compound in magnolia may combat head and neck cancers 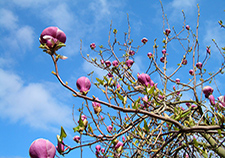 Honokiol, a compound derived from the bark of the magnolia tree, is proving to be a potent cancer fighter in lab studies. (Photo by Michael Warren via Wikimedia Commons)

Honokiol, a compound derived from the bark of the magnolia tree, is proving to be a potent cancer fighter in lab studies. (Photo by Michael Warren via Wikimedia Commons)

Magnolias are prized for their large, colorful, fragrant flowers. Does the attractive, showy tree also harbor a potent cancer fighter?

Yes, according to a growing number of studies, including one from VA and the University of Alabama at Birmingham that is now online in the journal Oncotarget.

Enter honokiol—chemical formula C18H18O2. As one of the major active compounds in magnolia extract, the phytochemical has been used for centuries in traditional Chinese and Japanese medicine to treat anxiety and other conditions. More recently, scientists have been discovering that the compound, found in magnolia bark, is a wily and versatile adversary of cancer. It seems to exploit many biochemical pathways to shrink tumors of various types, or to keep them from growing in the first place.

The Alabama scientists have now shown how it works against head and neck cancers: It blocks a protein called epidermal growth factor receptor, or EGFR. Prior research has found that almost all head and neck cancer cells display an over-abundance of the protein, and it had been suggested in the literature as a potential target.

The VA-UAB team says, based on its lab studies, that honokiol binds more strongly with EGFR than does the drug gefitinib (sold as Iressa), which is commonly used to treat head and neck cancers.

The researchers tested honokiol on cell lines derived from human cancers of the oral cavity, larynx, tongue, and pharynx. In all cases, the botanical shut down the aberrant cells. The team also tested it against tumors implanted into mice, with similar results.

Senior author Dr. Santosh K. Katiyar and his colleagues wrote, "Conclusively, honokiol appears to be an attractive bioactive small molecule phytochemical for the management of head and neck cancer which can be used either alone or in combination with other available therapeutic drugs."

Katiyar has published extensively in the past on other natural substances that work against tumors, especially skin cancer. Some of his recent work has focused on compounds in green tea, for example, and grape seed proanthocyanidins.