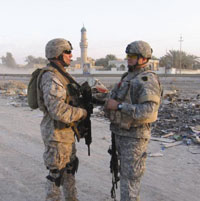 Tim Bahr was an active duty Marine from 1972 to 1992, and as a reservist was called back to active duty in 2005, serving in Iraq. He says that throughout his military career, he has been to "most of the 'garden spots' Marines tend to be sent when the need arises."

Today, the fit 58-year-old remains in the Individual Ready Reserves, but he's got another important role: As a certified peer specialist at a VA clinic in rural Wisconsin, he leads support groups for Veterans and their spouses. He also teaches the mantram method, as a certified facilitator, and is an avid practitioner himself.

Bahr works at the Rhinelander Community-Based Outpatient Clinic, near the Iron Mountain (Wisc.) VA Medical Center. He first learned about mantrams from the clinic's psychologist, Rod Linder, PsyD. At the time, Bahr was a volunteer looking to help fellow Veterans.

"I must say I was very leery of entering the classroom the first time for the mantram class because I'm not much of a TM [transcendental meditation] kind of guy," recalls Bahr. "It didn't take me long to learn that this was not TM, but rather a way to initiate a pausing action in my cyclic thinking." He learned to make choices about how to respond in the moment to stressful situations, rather than have the "same reaction each and every time."

At first, he tracked how many times a day he would repeat his mantram. The average was 12. Now, it's become automatic, instinctual. "Because I've been able to internalize my mantram as yet another tool to help me manage my daily life, it sometimes surprises me when I happen to notice I'm using it," he says.

Faced with a distressing sight, sound, smell, or event—something that triggers memories of war—Bahr finds that the technique cuts his stress significantly. "Having my mantram pop into my mind without me having to actually initiate it on my own—this lessens the adverse reaction." He says that as a result, he has a "much better quality of life."

One thing the Marine emphasizes to the Veterans he works with is that the mantram method—like any other treatment approach—is not a silver bullet. "Learning how to use a mantram will not take away all your challenges, nor will your use of a mantram work each and every time," says Bahr. And he says the technique must be practiced regularly. "It's a tool, and it must be used and sharpened if you want it to be sharp when the need arises."