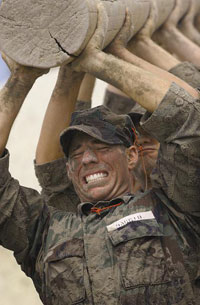 A study by VA researchers and colleagues in San Diego sheds light on how special operations forces are able to keep their cool and perform well under extreme stress.

The study used MRI scans to compare brain activity in 10 Navy SEALs with brain activity in 11 healthy male subjects of the same age. The scans were done as the volunteers switched back and forth between viewing positive images and negative ones, showing troops in combat. The positive pictures were preceded by a green shape and an audio tone. The negative ones were preceded by a red shape and a higher-pitched tone.

During the task, the SEALs showed more activity in parts of the brain linked to emotional control—the middle insula and bilateral frontal lobes. According to the researchers, this means they were "less reactive to anticipatory stressors." They had less anticipatory anxiety over what would happen in the next moment.

The authors say the study "suggests that optimal performance is achieved through discrete focus of attention." The SEALs were more focused in the moment: less anxious about what would happen in the next few seconds, and less affected by what happened a few seconds ago.

The study couldn't determine whether this ability of the elite warriors was innate or the result of their super-intense training. Either way, the researchers say further research could lead to insights to benefit military training in general.

Simmons is with VA's Center of Excellence for Stress and Mental Health and the University of California, San Diego. Coauthors on the study were from the Naval Health Research Center, the University of Texas, and other institutions. (NeuroReport, March 7, 2012)