May 2013 – Table of Contents
Program news

VA's chief research officer to step down after eight years 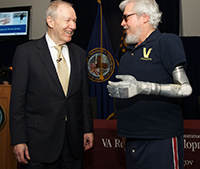 Dr. Joel Kupersmith shares a light moment with Vietnam-era Veteran Artie McAuley at a VA headquarters event during National VA Research Week in 2012. McAuley, who lost his arm in a car accident in 1969, participated in VA tests of the DEKA advanced prosthetic arm. (Photo by Emerson Sanders)

Joel Kupersmith, MD, who has served as VA's chief research and development officer since 2005, is stepping down from the role this month. Kupersmith, a cardiologist and former medical school dean, is credited with several initiatives that have broadened the scope, impact, and efficiency of VA research. VA Research Currents spoke with Kupersmith about his tenure, the longest of any chief research officer in the history of the program.

When you arrived in VA in 2005, what did you see as the biggest challenge to overcome?

There was work to be done in terms of improving the peer-review system that we use to decide which investigator proposals to fund in specific areas, and building confidence that it worked as it should. Today, the fair and rigorous process we have is highly respected. Another challenge was ramping up deployment-related research, in response to the influx to the VA system of wounded and injured Veterans from the wars in Iraq and Afghanistan. The first milestone in that regard was an RFA [request for applications] that we issued for research on neurotrauma, including traumatic brain injury, in 2006. There have been several RFAs on deployment research that have followed, and a lot of important VA-funded work has taken place as a result.

What have been the biggest accomplishments for the VA Office of Research Development (ORD), programmatically speaking, over the past eight years?

A survey of VA researchers had been conducted back in 2000, with a follow-up in 2010. The follow-up showed much greater job satisfaction. In particular, there was a 30 percent improvement in the “atmosphere of creativity” ratings. That's very significant, because that's the core of our research program. The respondents also expressed greater satisfaction with the amount of protected time they were given for research, our peer-review process, opportunities for collaboration, and the overall research environment. I believe these improvements have had a huge impact on the quality and productivity of VA research over the past few years.

Another accomplishment I would point to is the Million Veteran Program, which we launched in 2011. We believe it will make a major contribution in the coming years to Veterans' health care and to medical science.

Also, we've been able to successfully introduce some innovative new approaches to research. A prime example is the model of health services research that we call CREATE [www.hsrd.research.va.gov/create/default.cfm}. The idea is to involve the clinical leadership of VA as partners in every phase of the research. Another example is point-of-care research. This approach allows us to do clinical trials as part of routine care, instead of “extracting” patients and placing them in special settings and protocols. We expect that both these programs will be very impactful in terms of how effectively we are able to translate research findings into everyday care.

We've also expanded our comparative effectiveness research. VA has a long history of doing these trials, in which we compare treatments to find out which work best for certain patients. But we've built up the program and established a very prominent reputation for this type of research, which has become especially important amid the efforts toward national health care reform.

A few additional examples worthy of mention: We've greatly increased our level of collaboration and cooperation with other agencies, most notably the Department of Defense. This has resulted in the creation of two large research consortia that were the first of their kind. Also, we've created our Evidence-Based Synthesis Program [www.hsrd.research.va.gov/publications/esp], which has become an important tool for VHA leadership. Finally, we've established our Central Institutional Review Board to make it more efficient to conduct large clinical trials at multiple VA sites. These are just some of the programs we've introduced or expanded to do a better job of conducting research that has an impact on VA care and Veterans' lives.

From a purely scientific viewpoint, what do you see as the most important milestones achieved by VA researchers in the past few years?

One area that's really been remarkable to watch is the development of brain-computer interfaces. This work opens up whole new areas of assistive devices for Veterans and others with spinal cord injury, ALS, and any number of other conditions that involve paralysis. We've funded some prosthetics work that has been very important, such as the development of a bionic ankle that is now in use in the VA system, and the testing of the DEKA advanced prosthetic arm. Also, we've had a number of Cooperative Studies Program clinical trials that have generated findings that have been very influential in medical care, especially within VA. One example was the trial of prolonged exposure therapy for PTSD. Another was the COURAGE study, which had to do with care for stable angina. Then there was the VA Diabetes Trial, and the PIVOT trial on prostate cancer, and several others. These are studies that are frequently cited in the medical literature.

Many researchers at universities have been affected by the sequester, or in general by cutbacks in federal spending. Has this impacted VA researchers?

VA funding has increased and we feel very fortunate. People recognize the importance of what our program does on behalf of Veterans. At the same time, many of our researchers are also funded by the National Institutes of Health, and they are affected. In essence, funding of all federal agencies that deal with health research is important to Veteran-centric research, because of the partnerships we have. We continue to do the very best we can with the funds we have, and to try to maximize the value and impact of every dollar that is committed to research.

Some people would say that historically, VA research hasn't gotten the credit and recognition it deserves. One past secretary of VA called it “the greatest story never told.” Would you agree, and have you seen that change during your tenure?

I would agree. Many don't even know VA has a research program. I saw that when I came in 2005. I realized that we don't have enough resources to tell everyone about the program, so I decided we should at least try to increase awareness among our most important stakeholders: VSOs [Veteran Service Organizations], Congress, academic societies, our academic affiliates, other branches of government. We built a communications program around it, and today VA research is much better known. There's still work to be done on this front. There are great researchers in VA, and the world needs to be told about the work they are doing to help Veterans.