May 2013 – Table of Contents
Key findings 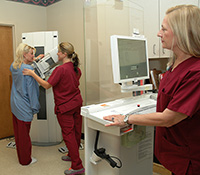 A study led by a VA investigator and involving more than 934,000 women found that most women face no extra risk if they get a screening mammogram every two years instead of every year. The report appeared online in JAMA Internal Medicine on March 18.

The new evidence adds to similar findings by the same study group regarding older women, those ages 66 to 89, that were published earlier this year in the Journal of the National Cancer Institute.

Both studies were by the Breast Cancer Surveillance Consortium, funded by the National Cancer Institute. The project has a network of sites where researchers collect data on breast cancer screening—including the San Francisco VA Medical Center, where Karla Kerlikowske, MD, leads the effort.

In the new study, Kerlikowske and colleagues collected data on more than 11,000 women with breast cancer, and more than 922,000 without breast cancer, who had mammograms between 1994 and 2008.

They found that women aged 50 to 74, even those with high breast density or on hormone therapy, face no extra risk of advanced breast cancer if they get a screening mammography every two years, compared with similar women who get yearly screens. Moreover, the less frequent screening meant less overall risk of false positives. False positives occur when an initial screening procedure indicates cancer but follow-up tests, such as repeat mammograms and biopsies, show otherwise. False positives are associated with extra anxiety, expense, inconvenience, and sometimes medical risks.

The researchers said women aged 40 to 49 who have extremely dense breasts—a factor associated with greater cancer risk—may be at lower risk for advanced cancer if they get a mammogram yearly. But by doing so, they also raise their chances of false positive results. This group—those with extremely dense breasts—comprises 12 to 15 percent of women in the 40 to 49 age bracket, the researchers said.

Denser breasts have more breast tissue and less fat, as seen on a mammogram. Women's breast generally get less dense as they age, although postmenopausal hormone therapy can delay that process. Denser breasts are linked to an increased risk of cancer, and they also make it difficult to detect cancer on mammograms.

Current breast-cancer screening guidelines vary: The American Cancer Society recommends that women get yearly routine mammograms starting at age 40. The U.S. Preventive Services Task Force, however, advises that women start only at age 50 and repeat the test only every two years.

Kerlikowske told United Press International that "individual decisions involve evaluating the balance between the benefits of screening—detecting cancer early on—and the potential harms, such as false positives among healthy women." She added that "some people who are at higher risk of disease"—such as those with a family history of breast cancer—"may be more willing than those at lower risk to accept such potential harms of screening."