May 2013 – Table of Contents
Journal scan 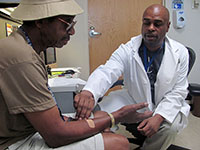 In 2010, VA began moving to a new model of primary care called Patient Aligned Care Teams or PACT. The model is based on the "patient-centered medical home" idea. Some of the features are team-based care, with a greater role for nurse practitioners and physician assistants; expanded hours and availability; more emphasis on preventive care; and close coordination with specialists when needed.

Now, a VA study has shown that patients at VA clinics that began adopting PACT features early on were at lower risk for avoidable hospitalizations, compared with patients at clinics that were slower to transition to the PACT model. The findings appeared online March 26 in the Journal of General Internal Medicine.

The study analyzed the records of 2.8 million Veterans who received care in 814 clinics in 2009. The researchers looked at how often patients experienced avoidable hospitalizations, for conditions such as asthma flare-ups, dehydration, diabetes complications, or urinary tract infectionsâ€”problems that ideally could have been handled on an outpatient basis.

The study showed that patients in the PACT-oriented clinics were less likely to be hospitalized. Among the findings: Veterans in clinics with the highest scores on access and scheduling had 17 percent lower risk of having an avoidable hospitalization, compared with their peers at the lowest-scoring clinics. Care coordination and transitions in care were also strongly linked to lower hospitalization rates.

The researchers determined that if an average-sized VA primary care clinic, with 3,500 patients, were to move from an average level of PACT adoption to the top level, the savings in health care costs would be about $83,000 per year, due to the reduction in hospital stays.

The researchers say the study can't prove a causal connection between the PACT model and lower hospitalizations, but the results suggest that PACT care does yield better outcomes in this regard.