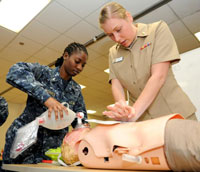 More than 200,000 women Service members have been deployed to Iraq and Afghanistan—the largest wartime deployment of women in U.S. history. Today there are more than 1.8 million women Veterans in the U.S.—about 8 percent of U.S .Veterans—and by 2030 women are expected to account for some 14 percent of the nation's Veteran population.

Increasingly, VA researchers have been investigating the health problems unique to women and exploring the impact of wartime deployment and trauma on women's health. One such recent study provides compelling evidence of the link between physical and mental health problems in women Veterans.

Examining the records of more than 71,000 women Veterans of Iraq and Afghanistan, researchers found a higher prevalence of reproductive and other gender-specific physical health problems in those with a mental health diagnosis. The study, published in September in the journal Women's Health Issues, was conducted by a team with VA and the University of California, San Francisco.

"Several important prior studies of the impact of combat service on women have shown a clear association between mental health and physical health problems," says lead author Dr. Beth Cohen, MD, MAS."Our goal was to build on those findings, focusing on a larger group of women and a broad range of health conditions." Cohen is a physician at the San Francisco VA Medical Center and an assistant professor at UCSF.

More than 71,000 women included in study

Her group analyzed national VA data on more than 71,000 women who were new users of VA health care from October 2001 through December 2010. The women were clustered into five groups, based on the presence or absence of mental health diagnoses, including depression and posttraumatic stress disorder.

Women with any mental health diagnosis had higher prevalence rates across several categories of reproductive and gender-specific physical conditions, such as sexually transmitted infections, painful menstruation, urinary tract infections, and infertility. Among the specific findings:

The trends held true, for the most part, even after the data were adjusted for demographics, military service characteristics, primary care use, and drug and alcohol use.

Possible reasons for the link

In their paper, Cohen and colleagues, citing prior studies, offer several possible explanations for the link between mental diagnoses and women's reproductive health problems:

The researchers say the findings underscore the importance of VA's ongoing effort to integrate mental and physical health care, and to expand services for women Veterans, especially those of reproductive age.

Says Cohen:"VA has demonstrated a strong commitment to this new generation of women Veterans, with research, pilot programs and new clinical resources to improve health care for women. This study gives us further insight on the unique connection between mental and physical health in female Veterans. This knowledge can help us make strategic research and clinical decisions to best meet the ongoing needs of all of our patients."

The work was supported by VA; the National Heart, Lung and Blood Institute; and a private foundation.