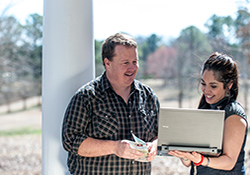 The U.S. Census Bureau identifies rural more by what it is not rather than what it is. Urban areas have 50,000 or more people in them. Urban clusters have at least 2,500 but fewer than 50,000 people. Rural? That's the rest of the country.

If you're an average American, there's about a 20 percent chance you live in a rural area. For Veterans, though, that number jumps to nearly 40 percent. That number can be misleading, though, because rural Veterans, regardless of ethnicity, age, or gender, are less likely than their urban counterparts to enroll in VA. They are also less likely to seek VA care for physical ailments and mental illnesses, to schedule regular wellness visits, or to seek out VA benefits.

The reasons are as diverse as the Veterans Dr. Michelle Hilgeman sees every day as a clinical psychologist at the Tuscaloosa (Ala.) VA Medical Center. Over half the patients she cares for are rural, but she knows there are many in her area who are not showing up at her clinic or any other.

"There are a huge number of Veterans who are rural, particularly in states like Alabama, and they're not getting the care they need," says Hilgeman. "There are towns all over this country where industries have dried up and left behind rural communities without a lot of resources. These Veterans don't have access to primary care, let alone specialty care like mental health or psychiatric services."

With that in mind, Hilgeman and a research group led by Drs. Lori Davis and Stefan Kertesz designed an outreach initiative that relies on motivational interviewing techniques, a 20-minute educational video titled VA in Motion, and a good pair of walking shoes. "As we designed this intervention, we had in mind the barriers rural Veterans face," says Hilgeman. "The outreach workers are going into the community and really hitting the pavement in terms of going to the local churches, barber shops, VSO offices, and anywhere else Veterans might be in their daily lives. They're engaging the Veterans in conversation in order to get them enrolled in VA."

Hilgeman's study of the program, which was published online Dec. 15, 2013, in the Journal of Rural Health, showed that a little bit of extra assistance can go a long way in getting Veterans to take advantage of VA care and benefits.

Of 205 Veterans in the study, half engaged in about 30 minutes of motivational interviewing with a social worker, watched the 20-minute VA film, and received another half-hour of enrollment support. Hilgeman titled this group the EEE, enhanced enrollment and engagement outreach group.

The other half, termed administrative outreach, or AO, received a typical VHA enrollment document package and some personal outreach. "These Veterans still had an outreach worker engage with them in their community and follow up with them at their homes. That's still a lot of hands-on assistance that goes beyond usual enrollment procedures," says Hilgeman.

And what happens when Veterans get in the door faster? "The more quickly we can see these patients, the faster we can identify unmet needs, diagnose under recognized conditions, and begin treatments that will result in better health and behavioral outcomes," says Hilgeman.

That is why the program used the combination of motivational interviewing and the video, explains Hilgeman. "One of the main barriers is a sort of ambivalence to health care in general," she says. "We thought motivational interviewing paired with the video would pack a double punch in that it would encourage them to seek care while also dispelling misperceptions about VA care quality."

The program was so effective it's already being tailored for use to target homeless Veterans, those with cognitive impairments, and older Veterans and their caregivers. One of the best parts, according to Hilgeman, is that the program pays for itself. "It isn't very expensive, we found, to operate the outreach workers, and with each new Veteran that comes in, there is a cost savings. Chronic care is much less expensive to the taxpayer if we're able to maintain people's health regularly rather than only through emergencies."