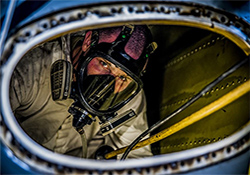 Airman 1st Class Nicholas McKinney prepares to be extracted from the inside of a C-17 Globemaster III fuel tank during training at Joint Base Charleston, S.C. Fuel system repair airmen remove, repair and install the fuel cells and tanks. (Photo by Airman 1st Class Tom Brading)

Airman 1st Class Nicholas McKinney prepares to be extracted from the inside of a C-17 Globemaster III fuel tank during training at Joint Base Charleston, S.C. Fuel system repair airmen remove, repair and install the fuel cells and tanks. (Photo by Airman 1st Class Tom Brading)

It's a fact aircrews know well. Service members who work in and around aircraft are more likely to suffer hearing deficits. But new VA research on the effects of jet propulsion fuel-8, commonly known as JP-8, suggests the problem may be more complex than previously thought.

Dr. O'neil Guthrie, a research scientist and clinical audiologist with the VA Loma Linda Healthcare System in California, says it's not just the noise that is harmful. It can also be the fuel itself.

"JP-8 is one part of a larger class of hydrocarbon chemicals," says Guthrie. "What we're seeing is that even at subtoxic levels, the exposure is affecting the brain and resulting in auditory processing dysfunctions."

While research has tied fuel vapors to hearing problems in the past, Guthrie's study is among the first to definitively link JP-8 with auditory processing dysfunctions —changes that occur inside the brain rather than the ear. The work was published recently in the Journal of Toxicology and Environmental Health.

Generally, when people talk about hearing loss, says Guthrie, they tend to think in terms of actually not being able to hear a sound. With central auditory processing dysfunction, on the other hand, the sound comes through fine.

"They can hear sounds but the brain has a hard time deciphering the message," says Guthrie.

Think about dyslexia, but for the ears.

"It's a more insidious problem to have. We can manage hearing loss rather effectively with hearing aids," says Guthrie, "but processing the sound—allowing the brain to discriminate—that's something different. We don't yet have a good way to manage that."

For the study, Guthrie, who is also an assistant professor at Loma Linda University Medical Center, used 80 rats. Twenty were exposed to 85 decibels of noise for six hours per day, a level considered safe by the Occupational Safety and Health Administration. Twenty more were exposed to low levels of JP-8 while an identical group received both the noise and the jet fuel. The final twenty served as a control.

After four weeks, none of the rats showed significant levels of hearing loss; however, those exposed to the jet fuel did develop auditory brainstem dysfunctions, particularly those that received combined doses of jet fuel and noise.

Anyone who works around fuel may be at risk

"What we've got is people going to their commander saying something is wrong," says Guthrie. "We give them a hearing test. They pass. We send them on their way and that's not addressing the problem. People with hearing difficulties tend to shy away from communication. That can lead to isolation, depression, and a poor quality of life. We're missing a lot of people just based on the way we test for hearing deficits."

Furthermore, because JP-8 is essentially the same as other hydrocarbon fuels, differing mainly in the chemical percentages, the same risk that aircrews, pilots, and mechanics face may also affect anyone who is consistently around other types of fuels. This can include, for example, truck drivers, gas station attendants, and potentially even passengers who are frequent flyers on commercial jets.

"We need to develop ways to monitor combined exposures (i.e., fuel and noise exposure) and develop safety guidelines," says Guthrie. "Making sure people are limiting their exposure by respiration, wearing protective clothing, and ensuring the fuel doesn't come into direct contact with the skin."

Adds Guthrie: "The next thing we need to look at is treatment. If we know the chemical is affecting the brain, and understand what's going on at the cellular and molecular level, then hopefully we can design treatments to help."