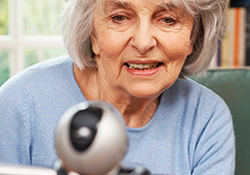 Researchers found Skype to be an effective way to deliver psychotherapy to homebound older adults with depression. (Photo: ©iStock/MachineHeadz)

Researchers found Skype to be an effective way to deliver psychotherapy to homebound older adults with depression. (Photo: ©iStock/MachineHeadz)

VA and university researchers found the popular video calling tool Skype to be an effective way to deliver psychotherapy to homebound older adults with depression. In fact, the approach was even more effective than in-home visits from a therapist.

The study appeared online Feb. 5 in the journal Depression and Anxiety.

The authors wrote that the approach has the potential for "easy replication and sustainability to reach a large number of underserved older adults and improve their access to mental health services."

Senior author was Dr. Mark Kunik, a psychiatrist at the Michael E. DeBakey VA Medical Center and associate director of VA's Houston-based Center for Innovations in Quality, Effectiveness and Safety. Lead author was Dr. Namkee Choi at the University of Texas at Austin.

Nearly 160 older adults with depression took part in the six-week study. All were low-income and homebound.

A control group received weekly 30-minute phone calls offering only general support, with no specific therapy. A second group received psychotherapy via Skype, on laptops they had been given and taught how to use during an initial in-person meeting. A third group had a therapist visit them at home for all the treatment sessions.

The two treatment groups received a form of cognitive behavioral therapy called problem-solving therapy. Over the course of six hour-long sessions, therapists worked with patients on evaluating their problems, and identifying and implementing solutions. They also tried to motivate them to take part in enjoyable activities.

Both groups that received the therapy—either in person, or via Skype—showed improvements in depression. They also reported decreasing disability. The improvements in the Skype group, though, remained stronger at a nine-month follow-up.

The control group, which received only "care" calls, also improved, but not as much as the two therapy groups.

Why did Skype therapy have an edge over in-person therapy? The researchers theorize that the volunteers may have felt more comfortable with the video set-up than with having someone in their home. The therapists reported that the Skype patients appeared more focused on the work, whereas the in-person group seemed more distracted. They took more breaks during their therapy sessions—for example, to answer the phone, use the restroom, or get a glass of water.

Kunik and colleagues say most older people prefer to avoid antidepressants because they are already on several medications for other health problems. That makes psychotherapy especially valuable for them. But sending therapists into the homes of homebound older adults can be costly—and there is a shortage of geriatric mental health specialists. Delivering the therapy via video call, say the researchers, may be an ideal solution.