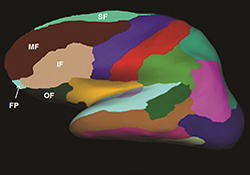 The graphic shows the brain regions that were examined in Dr. Linda Chao's MRI study of Gulf War Veterans and the link between their sleep quality and brain volume.

The graphic shows the brain regions that were examined in Dr. Linda Chao's MRI study of Gulf War Veterans and the link between their sleep quality and brain volume.

In a study of 144 Gulf War Veterans, those with the poorest sleep scores showed lower brain volume on MRI scans. The study appeared in the March 1, 2014, issue of the journal Sleep.

Past studies have linked poor sleep to reduced volume in certain areas of the brain—namely parts of the frontal lobes, in the cerebral cortex—but the new findings show more extensive changes.

"The surprising thing about this study is that it suggests poor sleep quality is associated with reduced gray matter volume throughout the entire frontal lobe and also globally in the brain," lead researcher Dr. Linda Chao told MedicalExpress.com.

Gray matter is made up mainly of neurons, the most important type of brain cell. White matter, in contrast, is made up of axons, the long, thin fibers that extend from neurons and relay messages.

Chao is with the Center for Imaging of Neurodegenerative Diseases, based at the San Francisco VA Medical Center and UCSF.

The researchers used a questionnaire known as the Pittsburgh Sleep Quality Index. It asks people questions such as how long they sleep, how easily they fall asleep, how often they wake up during the night, and whether they find it hard to stay awake during the day.

Veterans in the study who reported the worst sleep had the lowest total cortical and frontal gray matter volume. The finding held even after Chao's group controlled for other factors that could potentially affect brain volume. These included age, PTSD, depression, Gulf War illness, past traumas, and the use of certain psychiatric drugs.

Chao and colleagues also controlled for wartime exposure to the toxic chemical sarin. In studies published in 2010 and 2011, the San Francisco VA group had found reduced gray matter and white matter, as well as lower volume in the hippocampus—a brain area important in memory and learning—in Gulf War Veterans who had been exposed to toxic chemicals at the Khamisiyah munitions dump.

Chao says the new study doesn't necessarily prove that poor sleep causes reduced volume. That would need to be explored in a different type of study.

By the same token, she says it's unclear what impact sleep treatment might have on the brain. "I don't know of any published reports linking improved sleep with changes in brain structure," she notes. However, regarding brain function, she cites a 2008 study that found that people with insomnia who received cognitive behavioral therapy regained the ability to do well on certain cognitive tasks.