Pain reduction, via positive psychology and the Web 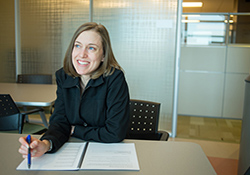 Dr. Leslie Hausmann, a research psychologist at the Pittsburgh VA Medical Center, is using positive-psychology activities to help Veterans and others cope with chronic pain. (Photo by Bill George)

Dr. Leslie Hausmann, a research psychologist at the Pittsburgh VA Medical Center, is using positive-psychology activities to help Veterans and others cope with chronic pain. (Photo by Bill George)

Visitors to a positive psychology website who were given simple activities to do over six weeks—such as writing about three "good things" each day in a journal—reported less physical pain for up to six months after the study.

The VA study was published online Feb. 22 in the Journal of Pain.

There is growing scientific evidence for the idea that positive thinking can help thwart physical pain. But the new study is among the first to show how this can be achieved via the Internet. It is also among the first to report relatively long-lasting effects from such simple, low-cost methods.

The study recruited volunteers through a website hosted by the University of Pennsylvania's Positive Psychology Center. The study involved 417 volunteers, all reporting mild to moderate pain at the outset. Most were women, and most were college-educated.

The volunteers were randomly assigned to complete 0, 2, 4, or 6 positive activities over six weeks. The exercises, all shown to boost well-being when administered in person, centered on concepts such as gratitude, mindfulness, and identifying and using personal strengths.

The participants, on average, completed about half the activities they were assigned. In any case, those given at least four activities showed substantial improvements in pain scores relative to the other volunteers. The gains persisted when the participants were surveyed one, three, and six months after the completion of the study.

According to Hausmann's team, the study was based on the idea that pain is a function of not only biological factors, but "psychosocial" ones as well. The effect has been seen in past studies. For example, one trial found that people in a nursing home who watched a funny movie reported less physical pain afterward—and needed less pain medication. Another found that a simple positive psychology exercise—having people write about their vision for their "best possible self" in the future—lowered their pain-intensity ratings.

The researchers say future studies should test methods that are more interactive, that "allow people to log their performance, reflect on their response to activities, and connect with others who are completing the activities." They point to some popular phone apps that already incorporate such features.

Hausmann is also working on a version of the therapy that doesn't rely on an Internet connection, for Veterans with chronic pain. She led a recent pilot in which Veterans with arthritis completed activities in a written workbook at home, with weekly support calls from a staffer.