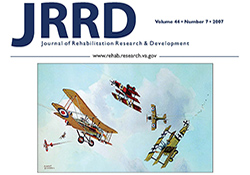 Journal of Rehabilitation Research and Development, Volumme 44. No. 7, 2007

Journal of Rehabilitation Research and Development, Volumme 44. No. 7, 2007

When VA's Journal of Rehabilitation Research and Development (JRRD) put out its first issue, the Beatles were all the rage, and the U.S. Surgeon General announced for the first time that smoking could be bad for one's health.

Health research has come a long way since 1964. (Has music? You decide.) To mark its 50th anniversary publishing rehabilitation studies, JRRD is including in each of its issues this year a reflection piece, looking back to that first issue of the journal. At the time, the publication was known as the Bulletin of Prosthetics Research.

Offering her own reflection on the journal's half-century mark, editor Dr. Stacieann Yuhasz said: "Research into prosthetics and rehabilitation has provided new opportunities to so many Veterans and civilians—opportunities that were unimaginable 50 years ago. When we took a look at the topics that were covered and the state of the research when the journal first launched, we found many similarities in the areas of focus. In most areas, science has taken huge advances, like in prosthetics and sensory aids. But in other areas, advances have been slower to develop, although much progress has been made."