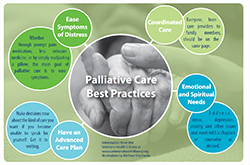 Dr. Amos Bailey knows something about death. As an oncologist, he began referring patients to home hospice shortly after it became widely available in the late 1980s. The experience changed his outlook on care for the dying.

"I was struck that I could have two patients with the same illness, one in the hospital and another at home," says Bailey, who today is director of the Safe Harbor Palliative Care Program at the Birmingham VA Medical Center and professor of gerontology, geriatrics, and palliative care at the University of Alabama at Birmingham School of Medicine. "When I visited the ones at home, they were so much more at peace than what I was seeing in the hospital. They had their medication at their bedside. Their families were there. There weren't unnecessary dietary restrictions. Even something as simple as sitting in a recliner can make a difference. There were environmental things that made being at home much more comfortable than in the hospital."

The experience eventually led Bailey to initiate a study called Best Practices for End-of-Life Care for our Nation's Veterans, or BEACON, which took place at six VA medical centers from 2005 to 2011. The study, which included more than 6,000 patients, was published online Jan. 22 in the Journal of General Internal Medicine.

Dying at home—preferred, but less likely

Polls consistently show that most Americans would prefer to die at home. Unfortunately, according to Bailey, that isn't likely. "More than half of Americans die in an institution, either a hospital or a nursing home and it appears that those numbers are rising. We need to realize people are going to die in hospitals and we need to make it a better experience."

Bailey is quick to point out that this isn't necessarily a knock on hospital care. Hospitals, he says, are required to follow certain guidelines. "You can't just leave medication out by the bedside in the hospital, and they have to worry about you falling out of that recliner," he says. "There have to be controls, but there can be a balance between home care and what's feasible in the hospital. We only die once and there is only one opportunity to provide excellent care to a patient in the last days of life."

When he came to the Birmingham VA, Dr. Bailey began to implement a comfort care order set for dying Veterans who were not able to be discharged to home or community hospice programs. This involved first identifying Veterans who were likely to die in the hospital, and then communicating with patients and families, and developing plans patterned on the best practices of home hospice care.

"It wasn't a perfect match," says Bailey. "It couldn't be. But we were able to make some significant changes. For example, we changed to sublingual medicines that dissolved under the tongue." Bailey also simplified the process for providing pain medication to dying patients, decreasing the time it took to provide relief to Veterans in pain.

He then teamed up with VA researcher Dr. Kathryn Burgio, a behavioral psychologist and also a professor at UAB. Together they studied the effects of Bailey's comfort care project. By 2003 they were able to demonstrate what Bailey describes as "remarkable" changes in the process of care. Having established the program at Birmingham, they then set out to test the effectiveness at other VA medical centers.

The new sites—in Florida, Georgia, Mississippi, and South Carolina—were selected as much for their proximity to Birmingham as anything else. Bailey and his team underwent routine site visits, spending several weeks at a time conducting educational visits with VA staff and then observing the results.

"The keys to excellent end-of-life care are recognizing the imminently dying patient, communicating the prognosis, identifying goals of care, and anticipating and palliating symptoms," says Burgio. To do this across multiple sites, the team developed training and education materials and leveraged the efforts of local champions to encourage culture change. The goal of the research, according to Burgio, was not just to change the practice and behavior of individual providers, but also to change the culture of the hospital.

"It's difficult to do and sometimes even harder to accept, but when a medical provider is in lifesaver mode, they're not going to be focusing on the symptoms." says Burgio. "The sooner you realize a patient is dying, the sooner you can focus on their comfort. That can mean medications for pain, delirium, or other issues." It can also mean less use of intrusive techniques like nasogastric tubes or IV lines.

"We talked about things that weren't necessarily helpful, like feeding tubes and IVs," says Bailey. "We showed them that they didn't have to stop treatment in order to model their care on what hospice does at home."

The researchers looked at 16 care variables, from the use of medication for pain or confusion to pastoral visits. They encouraged providers to allow patients access to favorite food and drinks, tried to minimize invasive procedures, and allowed families to spend more time with loved ones.

Part of the focus is on the family members, says Burgio. "We want the bereaved family members to feel like everything they want has been done and that their loved one had a comfortable death. The traumatic death of a family member can affect people for the rest of their lives and make it harder for them to deal with their grief."

From improving access to pain medications to just letting patients sit up in a chair, BEACON led to improved rates for all 16 variables. "Every one of the outcomes we measured improved after implementation of BEACON," says Burgio. Orders for pain medication went up 11 percent, while the use of feeding tubes and IVs went down. Prescriptions for death rattle went up nearly 19 percent.

The researchers hope to expand their training program and eventually disseminate the best practices they have developed not only throughout VA, but nationwide. "Only about 15 percent of Veterans who die each year do so at a VA facility," says Bailey. "We need to be able to improve end-of-life care not just at VA facilities, but nationwide, and not just for Veterans, but for everyone."