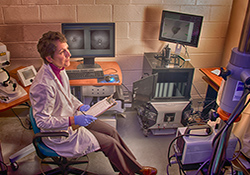 Dr. Machelle Pardue is with Emory University and the Atlanta VA Center for Visual and Neurocognitive Rehabilitation. (Photo by Adam Hernandez)

Dr. Machelle Pardue is with Emory University and the Atlanta VA Center for Visual and Neurocognitive Rehabilitation. (Photo by Adam Hernandez)

Exercising on a treadmill may prevent blindness—at least in mice. That's the upshot of a lab study by vision researchers at the Atlanta VA Medical Center and Emory University. They reported their findings in the Feb. 12, 2014, issue of the Journal of Neuroscience.

The researchers exposed two groups of mice to bright white light, similar to full daylight. The light is harmful to the eyes of the nocturnal animals. It breaks down the retina's photoreceptor cells, which detect light signals. The rest of the retina processes the signals and sends the image information to the brain,via the optic nerve.

The damage caused by the "toxic" light in mice is similar to that seen in people with age-related macular degeneration, or a genetic eye disease called retinitis pigmentosa. Both can cause blindness due to the death of photoreceptors.

Exercise 'comparable to a brisk walk'

In the lab experiment, one of the two groups of mice was exercised. The rodents ran on a treadmill for an hour a day, five days a week, for four weeks.

The researchers found the exercise—which they say is "comparable to a brisk walk"—was enough to prevent about half the damage to photoreceptors that occurred in the unexercised mice.

That compares favorably with what drugs may have to offer, notes lead researcher Dr. Machelle Pardue. "This level of preservation is similar to many pharmaceuticals that have been tested in this and other animal models."

Her team also found that a protective protein known as BDNF—for brain-derived neurotrophic factor—was elevated in the exercised mice. When the researchers injected a compound into the retina to block the action of BDNF, the exercised mice showed the same eye damage as the unexercised mice.

Pardue and coauthors wrote, "The data suggest that exercise is neuroprotective for retinal degeneration and that this effect is [controlled] by BDNF signaling."

Researchers have tried to give BNDF directly, but without much success. "The challenge is that BDNF has a very short half-life," explains Pardue, "so it's hard to achieve sustained delivery. Exercise offers a noninvasive way to get the body to make more BDNF."

She says findings from the new study "show impressive levels of preservation of the retina for a therapy that is inexpensive and noninvasive."

Pardue adds that the benefits may potentially apply not only to macular degeneration and retinitis pigmentosa, but also to other conditions that affect the retina, such as glaucoma and diabetic retinopathy.

She says that in May, her group will present findings on "the positive effects of exercise on the retina in diabetic rodents."

Diabetes affects some one in five VA patients, and retinopathy is a common complication of the disease.