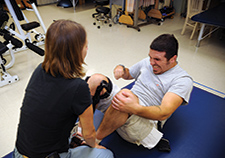 For Dr. Mary Jo Pugh, a research scientist at the South Texas Veterans Healthcare System and a professor of epidemiology and biostatistics at the University of Texas Health Science Center in San Antonio, the study of complex comorbidity clusters is personal. Pugh suffered a head injury while serving in the Air Force, and her husband is a Veteran of the Iraq war. While her early work focused on geriatric populations, the evolution of research on Afghanistan and Iraq war Veterans became increasingly compelling to her.

"My own experiences after head injury piqued my interest in the subject, but after my husband's deployments, I began to see some things in his friends that made me want to explore how different conditions manifest alongside one another," says Pugh.

What are comorbidity clusters?

Comorbidity clusters sound more complicated than they are. Take the polytrauma clinical triad, or PCT. When Veterans are diagnosed with one illness, say a traumatic brain injury, they're more likely to also have experienced posttraumatic stress disorder and pain. In the case of TBI, PTSD and pain tend to come in tandem. PCT is generally considered the signature complex comorbidity cluster found in Iraq and Afghanistan Veterans, but it's certainly not the only one.

On the surface it can seem obvious. If your foot is injured, you'll walk differently. If you walk differently, eventually our knee will also hurt. In reality, such as in the higher prevalence of cardiovascular disease in Veterans with PTSD, relationships are often less clear.

What is clear, however, are the benefits of identifying and treating conditions before they worsen. To do this, clinicians need a sense of when diseases are likely to co-occur, and at what rate. With this in mind, Pugh set out to create a roadmap of comorbidity clusters so care could be better coordinated and tailored to each Veteran's needs.

"Take chronic disease, for example," she says. "We found that individuals with PCT who were just a little older tended to develop chronic diseases. If clinicians could get a sense of who these people were beforehand, we might be able to delay or alter the course of that disease altogether."

Pugh and her team studied the records of nearly 200,000 Iraq and Afghanistan Veterans and discovered six major clusters:


The records were analyzed against 21 variables, from hearing loss to back pain to obesity. The results, published in the February issue of Medical Care, identified a number of trends. For example, Veterans from cluster 1 were more likely to be prescribed pain and psychotropic medications, while adverse outcomes were highest for those in clusters 1 and 3. Veterans in cluster 3 had the highest mortality rate, while those in 1 were more likely to use health care services. Cluster 5 experienced higher than normal back pain, but much lower rates of homelessness and depression than cluster 1.

Interestingly enough, despite the prevalence of research focusing on PCT, Pugh found only about 13 percent of the Veterans studied fit into that category. According to Pugh, this is a hopeful sign. "We hear so much about PCT and all of these conditions, but what we found was that 53 percent of Iraq and Afghanistan Veterans actively seeking care fell into the 'relatively healthy' category."

"Knowing what these Veterans are faced with will allow us to better use our post-deployment health clinics," says Pugh. "Right now they tend to focus on PCT, but based on this data, we can say that PCT is only affecting a small percentage of Veterans. This could allow us to identify trends in patients so that those with more complex issues go to one place and those who are healthier go to another. It would be like a form of triage that would allow us to tailor our care to each Veteran so that they receive exactly the care they need from the moment they arrive."

Headaches, stuttering among other issues studied

Dr. Mary Jo Pugh of the South Texas Veterans Health Care System was among the experts presenting at the 10th World Congress on Brain Injury, held March 19-23 in San Francisco.

In one of three presentations, she outlined her findings in the area of complex comorbidities among Iraq and Afghanistan Veterans (see main story). Another focused on whether neural damage could be responsible for stuttering among Veterans with traumatic brain injuries. Pugh found that Veterans with both TBI and PTSD are more likely to be diagnosed with fluency disorders (stuttering). Typically, these Veterans are prescribed medicine for the stuttering, a treatment that may not be effective for blast-related injuries.

A third presentation dealt primarily with persistent headaches, an unfortunate reality of life for some Veterans. Pugh and her colleagues looked at just under 39,000 OIF/OEF Veterans new to VA in 2008 and found that nearly 14 percent were diagnosed with persistent headaches. When she investigated further, Pugh discovered those same Veterans were also more likely to be diagnosed with traumatic brain injury, depression, or PTSD. Headache diagnoses were more likely for women and for Veterans over 30 years old.

Pugh suggests that the headaches could be predicted early in post-deployment care by careful attention to other related symptoms, particularly insomnia, dizziness, and tinnitus.