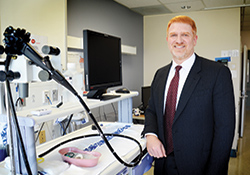 An experimental test that looks for blood and DNA mutations in stool is highly accurate for detecting colorectal cancer, says a new study. The results appeared in the New England Journal of Medicine on March 19.

The trial, led by Dr. Thomas Imperiale of the Indianapolis VA Medical Center, involved nearly 10,000 men and women at 90 sites.

One plus of the DNA method is that it is noninvasive. Colonoscopy is the gold standard for early detection of colorectal cancer, but many Americans avoid the procedure.

"Not enough people get screened," said Imperiale, also with Indiana University and the Regenstrief Institute. "If approved by the FDA, this noninvasive option may encourage some of those who currently avoid screening to get tested."

DNA test versus another stool test

The study compared the new DNA test to another noninvasive test that also analyzes stool, called fecal immunochemical testing, or FIT. FIT checks only for blood, whereas the "multitarget" DNA test also checks for genetic changes that could signal cancer.

The study volunteers submitted a single stool sample that was analyzed using both the DNA test and FIT. Each person also then had a colonoscopy, the results of which were used as a benchmark for the stool tests.

Based on colonoscopy, 65 patients in the study were found to have cancer, and 757 had precancerous lesions.

The DNA test detected about 92 percent of the cancers, whereas FIT found only 74 percent. The DNA test also outperformed FIT—42 versus 24 percent—in finding precancerous lesions.

One downside of the DNA test: It found more false positives than FIT. Among those whose colonoscopies showed no abnormalities, about 10 percent had positive DNA results, suggesting a potential problem. For FIT, the false positive rate was only around 4 percent.

In medical jargon, the DNA test was more sensitive than FIT, but less specific.

Imperiale's group wrote that sensitivity is more important in this context, "because the primary role of such testing is to rule out diseases such as cancer."

Patients, doctors should consider all the options

In any case, Imperiale stresses that while the study yielded promising results for the DNA test, at least in terms of sensitivity, it doesn't necessarily show which test is best for a particular patient.

"There are tradeoffs with each screening test," he said. "Physician and patient should decide together which test works best for the patient based on a variety of factors, including risk of disease, risk of false-positive and false-negative test results, tolerance for the preparation process for colonoscopy and the procedure itself, as well as the likelihood that the patient will complete the chosen screening test."

The study was funded by Wisconsin-based Exact Sciences, which makes the DNA test.

In an editorial that accompanied the report by Imperiale's team, VA researchers Drs. Douglas Robertson and Jason Dominitz cited the need for further research to determine the overall best approaches to colorectal cancer screening. They are currently heading a large VA cooperative study comparing FIT with colonoscopy. That study is expected to enroll some 50,000 Veterans at 42 VA medical centers.

Still, Robertson and Dominitz praised the new DNA test as being much improved from its early versions, which first underwent testing in the early 2000s. They said it's an attractive option because "it leverages knowledge of the biological pathways leading to colorectal cancer."