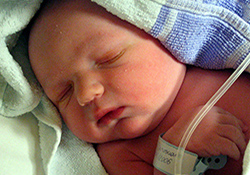 There was a 44-percent increase in births among VA-enrolled women Veterans between 2008 and 2012, and the numbers continue to rise. (Photo by Bertrand Devouard/Creative Commons)

There was a 44-percent increase in births among VA-enrolled women Veterans between 2008 and 2012, and the numbers continue to rise. (Photo by Bertrand Devouard/Creative Commons)

Call it a new baby boom. Today's Veterans are more likely to be women than at any other time in U.S. history. They're young, driven, and apparently deciding to start families, to the tune of more than 10,000 infants in five years.

"VA has been a system historically built around male Veterans and we've tended to focus on combat-related issues like TBI and PTSD" says Dr. Kristin Mattocks, of the VA Central Western Massachusetts Healthcare System. "Until very recently, no one knew how many babies were being born to women Veterans in VA care."

VA has provided maternity benefits to women Veterans since 1996, but the system wasn't perfect. While a Veteran's delivery expense was covered, the actual infant was not, even during the first few days of life. Mothers were forced to worry about private insurance, Medicaid, or even pay out of pocket for the costs associated with infant care.

In 2010, VA instituted a policy change expanding care for the infant's first seven days of life. "It was designed to provide insurance coverage for the first few critical days of life," says Mattocks. "It provides a security blanket for the Veteran and gives them time to get other insurance mechanisms in place."

Realizing there was a lack of data on how many women Veterans were actually giving birth using VA benefits, Mattocks designed a retrospective study to examine delivery trends over a five-year period. She and her colleagues published the results in the January - February 2014 edition of Women's Health Issues.

More than 10,000 births covered by VA over five years

Here's what they found: From 2008 to 2012, more than 300,000 women received health care through VA. Of those, 9,225 Veterans had inpatient birthsâ€”some more than once. This was typically at non-VA facilities, with VA paying the cost. Over five years, VA paid for the births of 10,235 babies at an estimated cost of $46 million. Costs are still being calculated for the seven days of infant coverage, due to the newness of that particular benefit.

Mattocks hopes increased information on who is using VA maternity benefits could lead to improved coordination with non-VA providers. "We found that women who used VA maternity benefits were already receiving VA care for injuries from deployment, depression, PTSD, or routine primary care. However, because maternity care is most often provided by community-based obstetricians rather than by VA providers, these pregnant Veterans potentially leave the VA system for the duration of their pregnancy, unless they require ongoing mental or physical health from VA providers. Coordinating ongoing VA healthcare with community-based obstetrical care is one of our highest priorities in VA."

The goal, according to Mattocks, is for VA to supply community providers with education on what factors women Veterans may be at risk for. "We believe VA really knows how to deliver that Veteran-oriented care, and community providers need to have a full understanding of these patients. Some of our research suggests women Veterans may experience pregnancy complications [at a higher rate than non-Veterans], so we feel like educating community obstetricians on women Veterans' [specific] health needs will allow them to provide better care."

Along with her colleagues, Mattocks is in the process of developing a pregnancy and maternity care coordination registry so VA can better identify how each Veteran and their babies are faring. "It's a bright spot for VA," she says, "to be thinking these Veterans are relying on VA to help with their pregnancies. Any way you look at it, the fact that these women are returning from combat and deciding to have babies is tremendous."