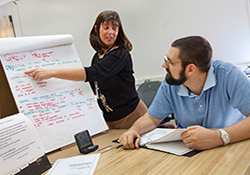 Occupational therapist Annemarie Rossi works with Veteran Lonny Ellison during a cognitive training session at the San Francisco VA Medical Center. The training was based on a program called GOALS, one of several approaches VA researchers have been evaluating. (Photo by Roy Kaltschmidt)

Occupational therapist Annemarie Rossi works with Veteran Lonny Ellison during a cognitive training session at the San Francisco VA Medical Center. The training was based on a program called GOALS, one of several approaches VA researchers have been evaluating. (Photo by Roy Kaltschmidt)

One of the most effective tools to manage a mild traumatic brain injury, or mTBI, is a smartphone calendar app, say VA researchers. Considered the signature injury of the Iraq and Afghanistan wars, mTBI can result in memory loss, mood disturbances, and other potentially disabling symptoms. For some, the injury can prove life-altering.

"With mild TBI, one of the most common symptoms is problems with prospective memory—remembering to do things," explains Dr. Elizabeth Twamley, a neuropsychologist with the VA San Diego Healthcare System. "We want people to remember to take their medication and buy cards for their wife's birthday and do all the important things they need to get back to work and school."

In previous conflicts, mTBI did not play much of a role, so little research has been done on the topic. Now, with between 10 and 20 percent of Iraq and Afghanistan Veteran having sustained at least one mTBI, VA researchers nationwide are hunting for viable treatment options. In addition to pharmacological and other medical therapies being studied, researchers are learning how to use various cognitive rehabilitation strategies to best effect.

"When the service members started coming back with TBI, we began to look for literature on how to treat them and there wasn't really any evidence-based research," says Twamley, also with the University of California, San Diego. "It became clear we needed to do something."

Twamley developed Cognitive Symptom Management and Rehabilitation Therapy, or CogSMART, to do just that. Over 12 weeks, Veterans going through CogSMART learn strategies to help with fatigue, sleep problems, headaches, and stress, and to improve attention, memory, and problem-solving.

Twamley compares the system to using a cane to support a weak leg. "By working around impairments, we can take advantage of an individual's strengths...and use different ways and possibly different brain areas to perform cognitively-demanding tasks."

One of the key tools in CogSMART is smartphone calendars. "They're the strategies successful people use every day," says Twamley. "There's no stigma associated with using your smartphone calendar to remember things. I use mine." Another smartphone feature that comes in handy is the alarm.

An example of the non-phone strategies included in the program is using acronyms to remember things.

Online cognitive programs: Do they work?

Dr. Amy Jak, also a neuropsychologist with the San Diego VA, directs the site's TBI cognitive rehabilitation clinic. She adapted a version of CogSMART for the patients in her clinic to use and, like Twamley, she speaks fondly of smartphones. "Smartphones do a lot of good things, particularly with our younger Veterans who have already embraced the technology."

Jak also led a review of the scientific literature on publically available computer-based cognitive training programs. "We looked at all the things you see in the news—the Lumosity type of program," says Jak of the $300-million-per-year online cognitive enhancement industry. "Veterans were coming in saying they heard about something on the Internet and wanted to know if it was any good."

The programs generally feature game-like tasks that are practiced for up to about 100 minutes per day, three to five days per week, for up to 12 weeks.

Jak and colleagues concluded that "the good news is that there weren't a lot of negative side effects. They don't hurt you." The not-so-good news? "Some of them may work, but mainly they work on the task you're doing." In other words, intensive use of a computer-based cognitive game may help you get better at that specific task, but doesn't necessarily generalize out to everyday life.

Meanwhile, other VA teams are exploring other ways to help Veterans cope with mTBI. A team at the San Francisco VA Medical Center, for example, has been testing a cognitive rehab program called GOALS, for Goal-Oriented Attentional Self-Regulation. It teaches participants how to focus on goal-relevant information and hold it in mind while managing distractions, and then to apply those skills in managing their own real-life goals.

Neurologist Dr. Anthony Chen describes one of the GOALS strategies, called Stop-Relaxâ€“Refocus: "Stop, relax, refocus on the goal to be accomplished, and when your mind wanders, practice redirecting your attention back to the central goal. This is inspired by mindfulness training that's been taught for thousands of years. The difference is that we have put a rehabilitation twist to it. This is not traditional meditation, but goal-oriented applied mindfulness."

The various approaches share a common goal: to help Veterans improve their quality of life. The researchers all agree progress is possible. With the right combination of treatment and management strategies, Veterans are finding they can accomplish more than they previously thought possible â€“ going to college, for example, or embarking on new careers.

Says Tamley, "We're excited about using these cognitive strategies to help Veterans reenter the community and to better themselves."

There are two broad categories of cognitive rehabilitation: