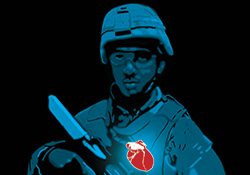 A recent study from VA and the Department of Defense found a link between combat deployment and new-onset coronary heart disease. (Photo illustration by Michael Escalante)

A recent study from VA and the Department of Defense found a link between combat deployment and new-onset coronary heart disease. (Photo illustration by Michael Escalante)

Even as the medical community studies the relationship between posttraumatic stress disorder and heart disease, a new VA-Department of Defense study adds evidence that the issue might run deeper than just PTSD.

The study, published in the March 2014 issue of Circulation , found that while screening positive for PTSD symptoms was associated with coronary heart disease, so was combat deployment.

Coronary heart disease (CHD) refers to the build-up of plaque in the arteries that carry blood to the heart.

The results are based on a study of 60,027 participants of the Millennium Cohort Study (www.millenniumcohort.org), a large longitudinal study that began enrolling active duty and Reserve or National Guard members in 2000.

There were 627 newly reported cases of CHD among the study population during the six-year period the researchers looked at. That may not sound like a lot, but coauthor Dr. Edward Boyko, of the Puget Sound VA in Seattle, points out: "When we talk about the military, we're talking about a healthy population. They have to pass fitness tests to be inducted and are generally absent of chronic diseases. So you would expect a lower rate of CHD than what you see in the general population."

Instead, the rate of CHD in the study cohort was similar that seen in the general population.

As for the association between combat deployment and CHD, "it could be the stress of combat," says Boyko. "It could be several things. At this point we don't really know. You have to be careful what you infer. [Like] the association between carrying matches and lung cancer. Statistically speaking, people who carry matches around tend to have higher rates of lunch cancer because they're smokers. Well, we can look at the numbers and see that combat deployments were related to higher rates of CHD. To actually determine why that happens will require further investigation."

According to Boyko, who collaborated with colleagues from the Naval Health Research Center, the findings do not affect general healthy-heart recommendations relating to diet, physical activity, and avoidance of smoking. He says all Veterans and service members, even those with multiple combat deployments, can still benefit from those lifestyle changes.