A change in anti-clotting drugs could influence bleeding, death rates 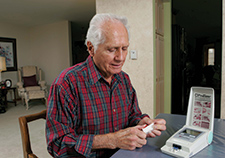 Wisconsin Veteran John Stoffel was taking part in a large VA study on the drug warfarin in 2008, when this photo was taken. (Photo by Jerry Daliege)

Wisconsin Veteran John Stoffel was taking part in a large VA study on the drug warfarin in 2008, when this photo was taken. (Photo by Jerry Daliege)

Patients with a common type of heart rhythm disorder who switch their anticoagulant medication may have a higher risk of bleeding, say VA researchers.

According to a team led by Dr. Mary Vaughan Sarrazin, of the Iowa City VA and the University of Iowa, patients who switch from warfarin (available as Coumadin and other brand names) to dabigatran (sold as Pradaxa) were 1.47 times more likely to have a gastrointestinal bleeding event.

Despite the increased odds of bleeding, patients with atrial fibrillation who switched had slightly lower risk of death.

Patients with atrial fibrillation are at risk for blood clots that could lead to a stroke, so they typically are prescribed an anti-clotting drug.

Sarrazin and her colleagues identified some 85,000 VA patients with atrial fibrillation. During the next 15 months, 1,394, or about 1.7 percent, switched from warfarin to dabigatran. Those Veterans tended to be slightly younger and were less likely to have kidney disease. They were also more likely to be rural. Of those 1,394 patients, 131 had a major bleeding event and 49 died. Among the rest of the population there were more than 10,000 bleeding events and nearly 7,000 deaths.

When the numbers were tabulated, Veterans who switched to dabigatran were more likely to have a bleeding episode but slightly less likely to die. According to Sarrazin, the seemingly contradictory results could be due, at least in part, to unmeasured risk factors in one or both groups.

Approved by the Food and Drug Administration in 2010, dabigatran is the first new oral anticoagulant available to patients with atrial fibrillation since warfarin became available more than 60 years ago. While both drugs have benefits and drawbacks, doctors say dabigatran requires less effort in the way of dosage fine-tuning and testing. Patients taking warfarin should typically take a blood test every month to ensure their dosage requirements haven't changed.

Although the lower odds of death for those who switch drugs are significant, "the decision to recommend dabigatran requires careful evaluation of patient characteristics," cautioned Sarrazin.

Sarrazin is a core Investigator at the Iowa City VA Center for Access and Delivery Research and Evaluation, and an associate research professor in internal medicine at the University of Iowa. The research was presented at the 2014 International Stroke Conference in February, and covered in Neurology Reviews, a professional publication for neurologists.