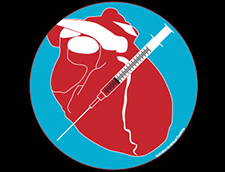 An experimental new gel, injected directly into the heart in the days and weeks following a heart attack, has shown promise in staving off heart failure. The technique was successful in pigs, and the results were published in the February 2014 issue of Science Translational Medicine.

Adult pig hearts are considered biologically comparable to those of humans, suggesting such a technique might translate well from animal experiments into a treatment for people.

"The heart is composed of four chambers, with the one that pumps oxygenated blood to the body termed the left ventricle," explains study co-author Dr. Francis Spinale of the Dorn VA Medical Center in Columbia, S.C. "A change in the shape of the left ventricle is one of the key factors that physicians measure in patients following a heart attack."

Typically, the stress of a heart attack releases tissue-destroying enzymes, or MMPs, while at the same time blocking helpful enzymes known as TIMPs. The resulting swelling of the left ventricle can ultimately lead to heart failure, the inability to pump blood throughout the body.

The gel, packed with protein inhibitors, should "restore the balance between MMPs and TIMPs in hopes of stopping this left ventricle remodeling process after a heart attack," says Spinale, also the director of the Cardiovascular Translational Research Center at the University of South Carolina School of Medicine.

To create the gel, the investigators combined a gelatin concoction containing hyaluronic acid with a specific TIMP. The compound was then injected, over a two-week period, into the hearts of pigs that had experienced medically-induced heart attacks. Pigs that received the injection tended to remain free of the dangerous left ventricle breakdowns that often lead to fatal heart failure.