On the road to Housing First for homeless Veterans 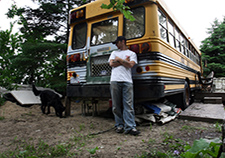 Nick, a former Army National Guardsman, was living in an abandoned school bus when this photo was taken. (Photo by Stormi Greener/ Greater Minnesota Housing Fund)

Nick, a former Army National Guardsman, was living in an abandoned school bus when this photo was taken. (Photo by Stormi Greener/ Greater Minnesota Housing Fund)

Sometimes caught in a destructive cycle of mental illness and substance abuse, at other times set back by money trouble or sheer bad luck across the board, many of America's 62,000 or so homeless Veterans struggle to get off the streets. Traditional housing options often come with strings attached—participants must be sober or participate in treatment programs—leaving many Veterans out in the cold.

How then to achieve VA's goal of ending Veteran homelessness by 2015? The answer, it would seem, lies in a "housing first" approach, which VA has embraced progressively over the past three years.

"The traditional programs that emphasize evidence of a stable recovery before someone can enter long-term housing are still important," says Dr. Stefan Kertesz, a physician researcher at the Birmingham VA Medical Center. "But VA took a large step and proposed making Housing First a national practice across the nation."

VA's adoption of Housing First provides permanent housing through government-funded rental vouchers, relying significantly on the "Pathways" model to Housing First, developed in New York by Sam Tsemberis, a professor of social work and a current VA partner. As part of a process of enhancing recovery, it allows people who are homeless to enter into stable housing before achieving sobriety or getting mental health symptoms under control.

"A good number of Veterans can attain success through more traditional programs, but for others, it requires the assurance of permanent housing at the outset," says Kertesz. "These are people who have been kicked out of standard treatment programs, but VA and these communities are saying that it isn't sufficient to leave those people on the street. We have decided it's morally unacceptable."

The need to cover 'broad terrain'

Similar programs have shown promise in somewhat smaller scale. Most often they exist in urban areas, where amenities are nearby and a local champion can ensure funding is provided.

"That's all well and good in a New York or Chicago," says Kertesz, "but it's entirely different when an institution is responsible to house 500 Veterans across 500 square miles."

Kertesz, Dr. Erika Austin, also of the Birmingham VA, and their colleagues set out to determine the successes and challenges of VA's Housing First efforts nationwide by surveying nearly 100 VA employees in eight VA facilities from coast to coast who were directly involved in the program.

The results, published in Psychiatric Services in May 2014, provide a glimpse into what VA is doing to help Veterans who are homeless and some of the challenges they are facing.

"First of all, the program has to deal with geography," says Kertesz, "VA employees have to cover broad terrain. That requires a car, a willingness to search for clients, and the ability to deal with a variety of housing markets—often across multiple states. The second major challenge is securing rental vouchers."

The rental vouchers themselves can prove problematic, according to Kertesz. Although they guarantee rent money to a landlord, the process of applying and receiving vouchers from the Department of Housing and Urban Development can be complex. "In the first year [of the study] it was obvious that there were issues with the rental vouchers," says Austin. "By the second year, VA had implemented some process-improvement activities to expedite the process and really streamlined it."

Retention in housing now at 80 to 90 percent

Even when the vouchers came in time, navigating the housing market was often the most time-consuming activity for case managers. "These are people who know a lot about clinical and psychological care," says Kertesz, explaining that case managers are typically social workers, not realtors. "There was real tension between the clinical support activities and housing placement. They are worried about how readily they can tackle problems when they have 20 to 40 Veterans spread across such a wide geography."

Even with these challenges, progress is being made. According to Kertesz, retention in housing nationwide is in the 80 to 90 percent range, which he sees both a moral success and a financial one, lowering the resource drain often felt in jails and hospitals.

Austin and Kertesz hope next to study the success rate in reaching Veterans with substance abuse or mental health issues who otherwise would have slipped through the cracks. "Those are our most vulnerable Veterans," says Austin, "and that's who this most serves."

Despite the challenges, and with 2015 looming, neither Kertesz nor Austin has a sense that VA case managers or leaders are wavering in their commitment to end Veteran homelessness. "The medical center leaders we spoke to were appreciative that a serious and demanding goal had been set," says Kertesz. "They were genuinely committed to trying to meet it."

"I expected to hear frustration," says Austin, "but instead I heard hope. We're doing better than before, and it's because of this push."