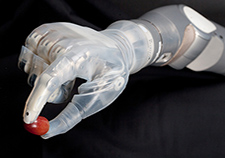 The DEKA arm features six preprogrammed grips that allow users to do a variety of everyday tasks, from handling small, delicate objects to using tools.

The DEKA arm features six preprogrammed grips that allow users to do a variety of everyday tasks, from handling small, delicate objects to using tools.

A futuristic prosthetic arm funded by the military, developed by a private company, and rigorously tested in a four-year VA study has now been approved for the commercial market by the U.S. Food and Drug Administration.

The FDA approved the DEKA Arm System on May 9, paving the way for the device to be manufactured, marketed, and made available in the VA health system. The cost for the system is not yet known—that will depend partly on licensing and manufacturing arrangements—but VA is expected to offer it as an option for any VA-enrolled Veteran who can clinically benefit from it. The time frame for the arm to be brought to market is also unclear at this point.

The arm was developed by DEKA Integrated Solutions Corporation, based in Manchester, N.H., with $40 million in funding from the Defense Advanced Research Projects Agency (DARPA), through its Revolutionizing Prosthetics Program. The program is also funding another sophisticated arm, being worked on at the Johns Hopkins Applied Physics Laboratory. That device is still in development. 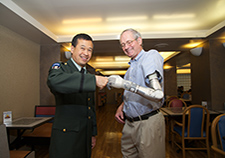 Fred Downs Jr., a Vietnam Veteran and former chief of prosthetics and sensory aids for VA, wears the DEKA prosthetic arm as she shares a light moment with Col. Geoffrey Ling of the Defense Advances Research Projects Agency at VA headquarters during National VA Research Week 2012. (Photo by Emerson Sanders)

Fred Downs Jr., a Vietnam Veteran and former chief of prosthetics and sensory aids for VA, wears the DEKA prosthetic arm as she shares a light moment with Col. Geoffrey Ling of the Defense Advances Research Projects Agency at VA headquarters during National VA Research Week 2012. (Photo by Emerson Sanders)

A leap forward from existing technology

The DEKA system is a huge leap forward in technology from existing prosthetic arms and hands. Still today, most upper-limb amputees use a hook or split-hook prosthesis that offers only limited function, or an artificial hand that looks natural on the outside but provides no finger movement or grasp. The DEKA arm offers a variety of firsts: It has multiple powered joints and degrees of freedom and can carry out several movements at the same time. It uses an array of sensors and switches and has wireless control. The wrist and fingers adjust into six different grips, enabling users to perform a range of everyday functions: picking up a grape or a glass, holding a tube of toothpaste, turning a key in a lock, using a power tool.

"Many features of this arm are unprecedented," says Dr. Linda Resnik, who led VA's study of the arm. She is with the Providence VA Medical Center and Brown University.

A more detailed discussion of the arm and its capabilities can be found in a May 2009 article in VA Research Currents.

Researchers collected data on the arm over four years at four VA sites—New York, Tampa, Long Beach, Calif., and Providence, R.I.—and at the Center for the Intrepid, a military rehabilitation site in San Antonio, Tex. The study findings have been published in a number of journal articles, including two earlier this year in VA's Journal of Rehabilitation Research and Development.

The study was the largest ever evaluation of a new upper-limb prosthesis.

Resnik says: "The big story is how we collaborated with DARPA—which involved the agreement with DEKA—and how we mobilized VA's clinical research network to conduct a rigorous study on this device. We wanted to ensure that the arm is optimized to best suit the needs of Veterans with limb loss."

Some three dozen Veterans who had lost an arm took part in the research. Some evaluated both the latest version of the DEKA arm, known as the Gen 3, and an earlier version, the Gen 2. VA researchers worked closely with DEKA engineers to refine the prototype based on the first round of feedback.

The resulting model incorporates a number of features recommended by the Veteran testers, ranging from internal batteries with longer life, to improved control systems and more reliable components. The latest model is also wireless and waterproof, and has improved "cosmesis," or external appearance.

Resnik says the arm may continue to undergo slight improvements leading up to its commercial release. In fact, she and her team are continuing their study. In the newest phase of the research, based in New York, Tampa, and San Antonio, participants learn how to use the arm at the clinic and then take it home for 12 weeks, with researchers monitoring their progress. The study is expected to last another year and a half and is now recruiting participants.

"It's an important study for us in VA," says Resnik. "We'll learn more about who can really benefit from this arm, and in what ways."

How is the DEKA arm controlled?

One of the key advances in the DEKA arm is its variety of control options.

'I was a one-sided person'

In a 2012 video produced by VA Research Communications, Army Veteran Artie McAuley talks about his experience in the DEKA arm study. McAuley, who lost his arm in an auto accident in 1969, says that before using the arm, "I was just a one-sided person." The video also features Dr. Linda Resnik, lead researcher on VA's DEKA arm study, and Christopher Fantini, lead prosthetist at the New York Harbor Healthcare System.