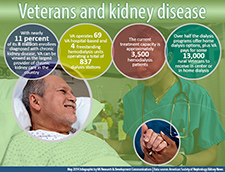 It's a silent problem. According to the National Kidney Foundation, nearly 26 million Americans are estimated to have chronic kidney disease, yet many don't even know it. The signs are easy to miss.

As a result, most patients aren't prepared for the disease and aren't educated on their treatment options, something that can make a significant difference. A recent VA study found that patients with end-stage renal disease who had taken part in an education and preparation program had 20 percent lower mortality rates over a median follow-up of 1.6 years, compared with patients who had not taken part in the program. The results were published in the March issue of Kidney International.

A team led by Dr. Majula Tamura of the VA Palo Alto Health Care System and Stanford University compared mortality rates in more than 3,500 adults with end-stage renal disease. Of those, 595 had participated in the National Kidney Foundation's Kidney Early Evaluation Program (KEEP) prior to development of end-stage renal disease, while the rest received the usual clinical care, which may or may not have included education and counseling.

"KEEP is a community-based program designed to promote early awareness about chronic kidney disease," says Tamura. "They host screening events and attempt to boost awareness. Because it is community-based, KEEP may help reach minorities and other disadvantaged groups."

Patients, in addition to providers, receive lab results from the event and information about guideline-based disease-management strategies. "Patients are given a copy of any lab results and if anything is abnormal then those are highlighted and explained by a volunteer physician," says Tamura.

The result, she says, is that education is not dependent on providers' having enough time during clinical visits.

"Not only are they getting [the diagnosis] earlier, they're prepared for it," says Tamura. "They know what kind of treatment they want."

Dr. Majula Tamura says that "because chronic kidney disease, especially in the early stages, can be asymptomatic, patients are often unaware they even have it until it becomes advanced."

When end-stage renal disease does develop, the kidneys have failed, leaving patients reliant on dialysis and the hope of a kidney transplant. According to Tamura, although some 600,000 Americans have the condition, preparation for it remains "suboptimal."

"The consequences of end-stage renal disease can be scary," says Tamura, on why patients and doctors don't always engage on the subject. "There's the lack of symptoms [until the disease is advanced], and sometimes a person's kidney function can remain stable for many years whereas others can lose kidney function very quickly. Clinically speaking, it can be difficult to determine what a patient's needs are."

In cases like that, she says, the difference between life and death may start with education.