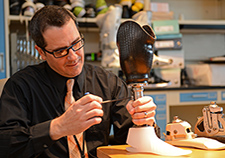 Dr. Andrew Hansen of the Minneapolis VA Healthcare System has led efforts to develop a prosthetic foot that works with a variety of shoe styles, including high heels. (Photo by April Eilers)

Dr. Andrew Hansen of the Minneapolis VA Healthcare System has led efforts to develop a prosthetic foot that works with a variety of shoe styles, including high heels. (Photo by April Eilers)

Whether we're heading to the gym or to a job interview, most of us take for granted the ability to match our shoes to the occasion. It just comes naturally, thanks in large part to the ankle-foot system's ability to adjust automatically to a variety of shapes and angles.

Now a team including VA researchers is hoping to give Veterans with lower-limb amputations the same options, and they are starting with high heels.

"Sixty-two percent of women say they wear heels over 5 centimeters," says Dr. Andrew Hansen of the Minneapolis VA Healthcare System. "For people with a lower-limb amputation, the situation is different. Their prosthetic limb is usually fixed to the given heel height of the shoe worn during alignment in the clinic. Patients can't easily change to a shoe with a different heel height without experiencing balance issues. That is if they can get the new shoe onto the prosthetic foot in the first place."

Hansen, whose interest in prosthetics is a result of growing up in rural Iowa around farmers who had lost limbs in machinery accidents, started working on a new kind of prosthetic foot while at Northwestern University and the Jesse Brown VA Medical Center in Chicago.

Hansen teamed with Dr. Margrit Meier, now with the Oslo and Akershus University College of Applied Sciences in Norway, and other researchers from Northwestern University to develop the original Shape & Roll prosthetic foot. Their more recent work expanded the Shape & Roll design, allowing it to accommodate a wide range of shoe heel heights. The results will be published later this year in the Journal of Rehabilitation Research and Development.

The foot takes advantage of some of Hansen's previous research. Shape & Roll prosthetic feet are designed to respond during walking like a natural foot would, curving upward with each step, like the rocker on a rocking chair.

"In VA hospitals, it is more likely that a company would make them and VA would purchase and provide them to Veterans," says Hansen. "But in resource-limited countries, all the material and information to make these feet is on the Internet."

"Having the ability to change your shoes, whether for employment reasons or just for looks, is an important choice," says Hansen. "That goes for men as well as women. This study focused on high heels, but the results work just as well for cowboy boots."