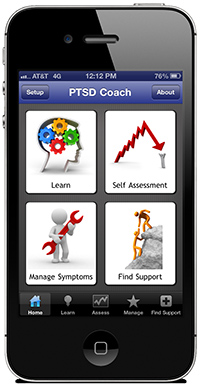 It's been downloaded more than 150,000 times by people in more than 80 countries. It's received high ratings from both iPhone and Android users. It's even won two big awards.

But the PTSD Coach smartphone app had never been formally studied in a sample of Veterans with posttraumatic stress disorder—until recently.

A team with VA's National Center for PTSD (NCPTSD) conducted a survey and focus groups with 45 users, all in residential treatment for PTSD. The findings appeared in Military Medicine earlier this year. The researchers say the study is preliminary, and should be followed up with further research, with more Veterans.

Overall, "participants were very satisfied with PTSD Coach and perceived it as being moderately to very helpful with their PTSD symptoms," wrote the study authors. They found that almost 90 percent of the Veterans were "moderately to extremely satisfied."

Lead researcher Dr. Eric Kuhn points out that the app was initially designed with input from nearly 80 Veterans with PTSD. They talked about what they wanted to see in the product.

"One of the things they said they wanted was tools they could use whenever or wherever they were experiencing symptoms—like standing in line at a store," says Kuhn, with NCPTSD's Dissemination and Training Division in Menlo Park, Calif. The group led the development of the app. The Department of Defense's National Center for Telehealth and Technology also played a role.

"Manage Symptoms" is one of four main features in the app. Users can rate the distress they are feeling at the moment, and choose from a number of quick evidence-based coping tools, some derived from cognitive behavioral therapy. They include, for example, breathing and progressive muscle relaxation exercises, or suggestions for stress-busters such as taking a walk.

In their own words...

The other main sections offer users options to learn more about PTSD; assess and track their own symptoms; and find support, in the form of emergency and crisis numbers or personal contacts.

Veterans liked the app regardless of their age

The 45 men and women who took part in the study ranged in age. Some used the app on their own phones, while others borrowed an iPod Touch as part of the study. Kuhn says these factors confirm that the app is a potentially valuable tool not only for younger Veterans, but also for Vietnam-era or older Veterans who may be less well-versed in the world of smartphones and apps.

The study didn't include a formal clinical assessment of the Veterans' PTSD symptoms, so Kuhn and colleagues can't say whether the app actually reduces symptoms over time. They recommend further research to look specifically at that question.

In addition to its high user ratings online, PTSD Coach has received an award from the Federal Communications Commission for enhancing accessibility, and one from the American Telemedicine Association for innovation.

In their own words...

Below is a sampling of what Veterans in the PTSD Coach study had to say about the app.

"I used it at night when I had nightmares. The relaxation exercise was really helpful."

"I thought it helped tremendously. When I had anxiety, the breathing helped."

"I like the explanation on PTSD. I had some revelations."

"I have memory loss and often forget the things we learn [in the treatment program], so it's good to have this. It's right there and I can go back in there anytime."

A few Veterans commented on things they didn't like about the app, and offered suggestions:

"With my chronic pain, I can't take a walk or dance [options offered as pleasant events], so I got frustrated. It would be great if you could put in your physical problems."

"It is frustrating when you have to look for the tool that you want, especially when you need it."

Overall, most said they would recommend it to others:

"I called my friend who has PTSD and told him to download it."

"I was pretty stoked about it. I even told some of my friends in the military about it via Facebook."