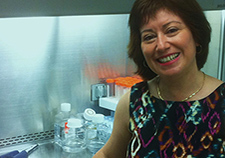 Dr. Valentina Echeverria Moran, with the Bay Pines VA, has been studying the therapeutic effects of cotinine, a byproduct of nicotine.

Dr. Valentina Echeverria Moran, with the Bay Pines VA, has been studying the therapeutic effects of cotinine, a byproduct of nicotine.

Even as the medical marijuana debate rages in the media, researchers at the Bay Pines VA Medical Center and the University of South Florida have quietly discovered potential benefits hidden in another product generally considered harmful—nicotine.

Cotinine, a byproduct of nicotine metabolism, effectively reduced depression and memory loss in mice, according to a study coming out in the July 2014 issue of Behavioral Brain Research. The results offer promise to patients with chronic stress, depression, and memory loss—all common symptoms associated with posttraumatic stress disorder.

"We know that people with stress or mental illness tend to smoke more than the general population," says Dr. Valentina Echeverria Moran, one of the authors of the study. "They say it relaxes them. Now we know it's a form of self-medication. There is science behind it." 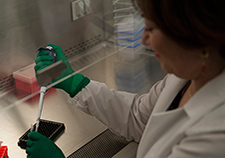 In the lab of Dr. Valentina Echeverria Moran at the Bay Pines VA, studies have shown potential benefits of cotinine—a nicotine byproduct—in treating depression, Alzheimer's, and other disorders.

In the lab of Dr. Valentina Echeverria Moran at the Bay Pines VA, studies have shown potential benefits of cotinine—a nicotine byproduct—in treating depression, Alzheimer's, and other disorders.

This does not, however, mean it's a good idea to smoke 'em if you got 'em.

Bypassing the harmful effects of nicotine

"We tested with about 10 times the amount of cotinine you would get from smoking," says Echeverria Moran. "Smoking is obviously harmful, but it's the nicotine that is addictive and unhealthy. Cotinine by itself poses little in the way of harmful side effects. We want people to stop damaging themselves while still reaping the positive benefits."

In this case, those benefits include an easy-to-absorb drug that reaches full potency almost immediately, a major advantage for Veterans with depression or memory loss.

"Cotinine stays in your body about 19 hours and is easily absorbed," notes Echeverria Moran. "A Veteran could take a daily pill and it would start accumulating in the brain." That accumulation, she says, is key to feeling the positive effects of an antidepressant during the crucial time following diagnosis.

"We have a high drop-out rate with our Veterans in mental health treatment," she says. "A medication that works quickly could increase their success rate."

In the study, mice that were given daily doses of cotinine performed better in memory tests and proved more resistant to stress and depression.

"We found that the cotinine increased synaptic activity in the frontal cortex and the hippocampus. The more synapses that are formed, the better the connectivity in the brain," says Echeverria Moran. "It's targeting functions that are common to most psychological impairments, from stress to PTSD to schizophrenia. Improving that synaptic plasticity can be very powerful, particularly if you were to combine the cotinine with psychotherapy."

The most recent findings follow on the heels of another report from the same team on how cotinine reduced plaques associated with dementia and prevented memory loss in a mouse model of Alzheimer's disease. That study, published in the Journal of Alzheimer's Disease, showed that mice treated with cotinine performed better on memory tests and seemed to provide complete protection form spatial memory impairment. In fact, the mice performance was on par with that of normal mice without dementia.

"For seven years we've been working on this," says Echeverria Moran. "And now, to finally understand how cotinine works and why it works so well is very exciting. This could be useful in so many of the conditions affecting our Veterans."