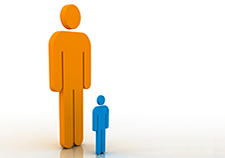 Shorter men are more likely to live longer than their towering counterparts. That's the consensus researchers came to following a more than 40-year study of some 8,000 American men of Japanese ancestry.

The Honolulu Heart Program/Honolulu-Asia Aging Study followed the men, all of whom were born between 1900 and 1919 and were living in Oahu, Hawaii, in the mid-1960s.

According to Dr. Qimei He, a VA researcher who worked on the study, shorter men not only lived longer, they had lower blood insulin levels and less cancer overall.

"The taller you got, the shorter you lived," said lead author Dr. Bradley Willcox, of the University of Hawaii, in a news release from the school.

Shorter men were more likely to have a protective form of the gene FOXO3, which is linked to longevity. The gene led to smaller body size during early development and a longer lifespan.

The results fly in the face of the conventional notion that height in developed nations is directly correlated to nutrition, with healthier children growing taller than those with poor nutrition. With that in mind, one might expect taller persons to have a lower mortality rate.

Not so, at least according to this study. Despite the study's firm conclusions, the authors acknowledge that the reasons for longevity are likely far more complex than just which form of the FOX03 gene a person has.

"The study doesn't explain why we see a higher mortality rate in taller men," says He. "There are several possibilities, including diet and metabolism. For example, there are some studies in animals that indicate longevity may be correlated with a relatively low-calorie diet during the growing period and adulthood."