ORD Home » Currents » Spring2014  »  Common peptide may hold key to who gets PTSD, who doesn't

Common peptide may hold key to who gets PTSD, who doesn't 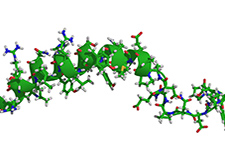 Researchers believe that neuropeptide Y, a chemical secreted by the brain and shown here in a molecular diagram, may play a key role in emotional resilience to trauma and the prevention of PTSD. (Illustration: Wikimedia Commons)

Researchers believe that neuropeptide Y, a chemical secreted by the brain and shown here in a molecular diagram, may play a key role in emotional resilience to trauma and the prevention of PTSD. (Illustration: Wikimedia Commons)

Significantly lower levels of a neurohormone were associated with posttraumatic stress disorder among Veterans of Iraq and Afghanistan, a recent VA study found.

Neuropeptide Y, (NPY) a peptide neurotransmitter, helps regulate anxiety and stress. "It's like a brake system," says Dr. Renu Sah, an assistant professor in the department of psychiatry and behavioral neuroscience at the University of Cincinnati, and a research scientist at the Cincinnati VA Medical Center. "Imagine a lion is chasing you. While you're running, your body is in a hyper state of function. After you get away, though, you need your body to return to normal"—and that's where NPY, among other brain chemicals, comes into play.

In collaboration with the psychoneuroendocrinology team headed by Dr. Thomas Geracioti at the Cincinnati VA, Sah measured NPY concentration in cerebrospinal fluid collected from 11 male veterans with PTSD diagnoses. She compared the results with those from 14 veterans who had seen combat but not developed PTSD.

New findings jibe with past results from Vietnam Veterans

"Previously, we were able to identify that NPY levels were reduced in individuals diagnosed with PTSD, but we weren't able to say whether it was due to combat exposure or the disorder itself. In this study, we were able to show an association of low NPY with PTSD symptoms and not combat exposure," notes Sah. "We confirmed our previous findings from Vietnam Veterans in younger veterans from recent combat. Importantly, our data suggest that we need to take a closer look at the NPY-PTSD link and how this peptide may contribute to PTSD."

The new findings may help explain why one warrior develops PTSD while another recovers fine, despite similar experiences.

"It may be a combination of different things," says Sah. "We do not know yet what causes NPY deficits in PTSD patients. There is evidence for genetic predisposition to low NPY levels in the brain. We also know from rodent models that chronic stress results in decreased NPY. If this is true, then bad genes or prolonged life stress could lead to an NPY deficit. For those individuals, getting hit with the intense trauma [such as combat] might make them particularly susceptible to PTSD."

"Introducing peptides into the brain"

Besides providing insights into PTSD, the research may eventually lead to new therapies.

"The most exciting part of this is that there are ways to introduce peptides to the brain," says Sah. "Researchers have successfully administered NPY intranasally into rats and shown a reduction in behaviors relevant to PTSD, such as anxiety and startle response. In the future, if someone has a history of early life adversity or chronic stress overload, you may be able to boost NPY levels right before expected trauma—such as combat—or even right after a traumatic event, before PTSD starts to take effect."

Sah cautions that a lot more work is needed—such as developing better therapeutic targeting techniques—before the research can be translated into clinical practice, but she says she believes the approach holds promise.