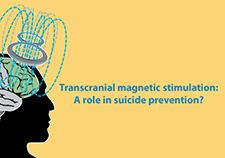 High doses of magnetic stimulation to the part of the brain controlling emotion effectively cut suicidal thoughts in half after only one day, according to a VA study reported in the May 2014 issue of Brain Stimulation. The treatment, already approved by the FDA at lower doses to treat depression, could offer an acute care option for doctors and families trying to help a suicidal patient in crisis, say the researchers.

Repetitive transcranial magnetic stimulation, or rTMS, involves taking an electromagnet, essentially a wire wrapped around a solid coil, charging it with electricity, and applying it to specific points on the skull, to target the underlying brain areas. The result is a very powerful magnetic field that can affect brain cells.

"Electricity doesn't go well through skin, hair, or skull for that matter but the magnetic field passes right through," says Dr. Mark George, a physician at the Ralph H. Johnson VA Medical Center in Charleston, SC.

George is also a distinguished professor of psychiatry, radiology, and neurosciences and director of the Brain Stimulation Laboratory at the Medical University of South Carolina.

He adds that "the rTMS is turning on and off very rapidly. We're talking on the order of once every three-tenths of a second, and that pulse stimulates the brain. If you pointed it at the part of the brain that controls your thumb, then your thumb would twitch."

Rather than twitch the thumb, however, George aimed the device at the left prefrontal cortex. This part of the brain helps control emotions, decision-making, impulses, and social behavior. Targeting this area with TMS is approved by the FDA as a way to treat depression, for those who haven't responded adequately to antidepressants.

"The FDA approved rTMS for depression in 2008," says George, "but the dosage is much lower than we used for this study. The current practice involves 3,000 pulses per day, five days per week, for four weeks, so you're requiring patients to come see their doctor every day for a month, with weekends off." What's more, according to George, because of the lower number of pulses, patients often won't see improvement in their depression for several weeks.

George's study focused on speeding up that process by increasing daily pulses to 9,000 while delivering the treatment for only three days. Side effects were minimal and distributed evenly between the sham and non-sham groups—namely, a few headache complaints and one minor burn. "One of our goals was to show that the higher doses were safe, and we were able to do that here," says George.

Forty-one participants split between the Ralph H Johnson VA and Walter Reed National Military Medical Center were enrolled for the study, each one in the midst of a suicidal crisis. "We had patients with bandages on their wrists from suicide attempts, patients who had just come from the ICU after purposefully overdosing on medication. We even had a person who was standing on a bridge one day contemplating suicide and sitting in our chair the next," says George.

All of the patients received traditional treatment for, as George puts it, ethical reasons. "These people needed help. They received counseling and medication in addition to taking part in the study."

Twenty of the participants were selected to receive the rTMS while the other 21 were allocated to a sham group.

"We tried very hard to mimic the noise and effects of the actual rTMS," says George, whose team went so far as to issue electronic cards to all the participants. When plugged into the machine, the card would register which group the participant was in, but without revealing this information to the clinician administering the treatment.

"The staff didn't even know at first," relates George. "We thought we had fooled everybody. But on the first day there was such a large clinical effect with patients becoming rapidly un-suicidal that the staff figured out who was in what group."

After three days the two groups scored similarly on the Beck Scale of Suicidal Ideation, suggesting that counseling and medication had caught up with the rTMS, and at nine months the two groups were identical.

According to George, now that the high doses have shown themselves to be safe, he expects doctors will start using them on hospitalized patients with depression to try and get them well quickly. As far as expanding the treatment to outpatients and other individuals, another study is proposed, this one at Fort Gordon in Georgia, involving active duty military personnel.

"This doesn't take anything away from the normal treatment. What it does is offer an acute treatment," says George. "Every 17 minutes a Veteran attempts suicide. This gives us a quick, effective treatment for patients in crisis. Right now all we can do is hospitalize them and change their medication. The idea is that TMS might buy enough time to stabilize a patient and get them through a crisis."

George compares the technology to breakthroughs in heart care. "Only a few years ago, if someone came into the hospital with heart problems they would be sent home if they weren't actually having congestive failure," he says. "The same goes for patients having a stroke. We just didn't have effective acute treatment. Now we have protocols for heart attacks and strokes even in the ambulance. Public awareness has gone up. People can tell when something is wrong and they know to get to their doctor for treatment."

"Maybe we can do the same thing with suicide ideation. If we could get people to realize they have a physical problem, a medical problem, and get them to come in for treatment, and then help them quickly, can you imagine how many lives we could save?"

George stresses, "If they don't come in for treatment, then no amount of medical technology can help."