Male breast cancer: A rare disease, on the rise 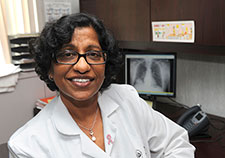 "I woke up in the morning with a good-sized lump in my chest. At that point in my life I had no idea men could get breast cancer. I contacted my doctor and we set up the same test women usually get—a mammogram and an ultrasound followed by a core biopsy. The doctor called me to let me know I had breast cancer. It was the first time I knew I had breasts..."

That's how one hard-boiled Marine recalls the beginning of his bout with male breast cancer. His story, along with that of others affected by the condition, is found on semperfialwaysfaithful.com.

A recent study led by Dr. Anita Aggarwal, an oncologist at the Washington, DC, VA Medical Center, is the most extensive look yet at the prevalence of the disease among VA patients. She and her colleagues combed the VA Central Cancer Registry to learn more about how many men in VA have the disease, and how it compares with breast cancer among female Veterans who receive care in VA. Aggarwal presented the findings at a meeting of the American Society for Clinical Oncology in early June.

"In the general population, it's very rare," points out Aggarwal, noting that fewer than 1 percent of breast cancer cases occur in men. She says it's on the rise, though, with data showing a 26 percent increase from 1975 to 2010.

Scientists don't yet have a handle on why that is, but they do know that men with breast cancer are typically diagnosed at a later stage than their female peers.

"With men, there's a delay in detection," says Aggarwal. "There's less awareness, no screening. And men don't palpate their breasts every month, as do many women. All these factors combine."

Many similarities with female breast cancer

A quick biology lesson: Men not only have breasts, but they also have milk ducts. And that's where the majority of male breast cancer originates. It's a form of the disease called invasive ductal carcinoma.

And just as the BRCA genes, among others, can help predict which women are at risk for hereditary breast cancer, the same is true of men. It turns out that men who test positive for the BRCA 1 or BRCA2 mutations are also at higher risk. But men are far less likely to proactively get the test. Some do if they have a family history of breast cancer.

The similarities extend to treatment. As with women, surgery is one option, especially when the cancer is still localized to the breast and hasn't spread. "Because they only have a small amount of breast tissue, in most cases they end up getting a mastectomy [removal of the entire breast] instead of a lumpectomy [removal of only the cancerous lump]," says Aggarwal.

And although men and women have a different hormone mix, men do have some estrogen and progesterone. So men whose breast cancer is driven by those hormones can get hormone therapy similar to that given to women. The side effects, though, can be more troubling for men.

"Men can get hot flashes from the hormone therapy, and this is very distressing to them—they don't want to go out in public with this, because they see hot flashes as a woman's condition," says Aggarwal.

A tough medical and emotional battle

This is just one facet of the emotional turmoil that men with breast cancer may endure, suggests Aggarwal.

"They get very distressed," she says. "In my experience, the first questions they will ask are,'Why do I have breast cancer? Are you sure that's what it is?' They tend to get depressed and socially isolated."

Says Aggarwal, the psychosocial aspects of the disease can be especially difficult for male Veterans when they also have posttraumatic stress disorder or another mental health condition.

Fortunately, there is help on the emotional front. Aggarwal notes that at her VA medical center and others, support groups for breast cancer patients attract men as well as women. By the same token, men with breast cancer can attend general cancer support groups. Much of the information will be the same, and they still have the opportunity to bond with other men who face potentially life-threatening cancers, whether prostate, lung, colon, or other forms.

Aggarwal is now seeking to connect with oncologists and others in VA who work with breast cancer patients to do a more extensive study.

"I would like to do a nationwide male breast cancer study," she says. "It would need to be a wide collaborative effort, since the total number of cases at any one VA or in any one region would be too small. We could look at epidemiology, chemical and radiation exposure, biology of the cancer, and psychosocial factors."

Another federal study is already underway, by the Agency for Toxic Substances and Disease Registry of the Centers for Disease Control and Prevention, to determine whether male breast cancer is linked to toxic exposures at Camp Lejeune in North Carolina, a Marine base where the water supply was chemically contaminated from the 1950s through the 1980s. The results are expected in 2015. Meanwhile, VA's Public Health website has health care eligibility information for Veterans and family members who may have been affected.