Heavy marijuana use tied to lung diseases but not cancer 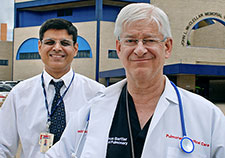 Smoking marijuana is not as bad as smoking cigarettes when it comes to lung disease. Marijuana usage clearly does cause bronchitis and airway inflammation, but it has not been linked to emphysema and it is only weakly linked to lung cancer, if at all.

These were some of the surprising conclusions reached by VA researchers Drs. Manish Joshi and Thaddeus Bartter, who reviewed recent studies on the controversial drug and its ties to lung diseases. Their review was published in the March 2014 issue of Current Opinion in Pulmonary Medicine.

Marijuana isn't exactly the new kid on the block when it comes to drugs. Whether for religious, medicinal, or recreational purposes, human beings have used the drug for over 3,000 years. It was even used medicinally in the U.S. until the early 1940s. Then, in 1970, the Controlled Substances Act listed marijuana as a schedule 1 drug. 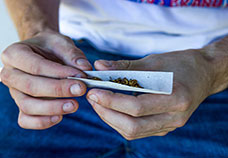 "Suddenly something changed," says Joshi, a staff physician at the Central Arkansas Veterans Healthcare System and an associate professor at the University of Arkansas at Little Rock. "Making it a schedule 1 drug meant it was all bad and implied, likely incorrectly, that there was nothing good in marijuana."

The difficulties of studying marijuana

One point the researchers emphasize is that medicinal and recreational use of the drug are quite different considerations.

"We now do know that marijuana has at least moderate medicinal properties, particularly with diseases such as childhood epilepsy, as well as pain control in cancer patients. But talking about medicinal and recreational uses is like comparing apples and oranges," says Joshi. "While medicinal use seems to have minimal side effects, recreational use carries risk without clear benefits." According to Joshi, aside from respiratory issues, potential negative impacts of recreational marijuana use include short-term cognitive and motor impairment, as well as damage to developing brains.

Regardless of which category of use researchers are concerned with, Schedule 1 classification makes studying the effects of marijuana, both negative and positive, particularly difficult.

"First of all, because it is illegal, people don't admit that they use it, or they're not honest about how often they use it," says Joshi. "To make matters more difficult, no two 'joints' are the same. Variability between chemicals in plants and their concentrations make it impossible to know exactly what any individual person is exposed to."

No clear data on tie to lung cancer

Generally speaking, says Joshi, "the smoke coming from a joint has mechanical properties similar to those of cigarette smoke." Interestingly, though, despite the similarities between marijuana and tobacco smoke, the researchers were unable to definitively tie heavy marijuana use to lung cancer.

"We found that use of marijuana is associated with chronic bronchitis symptoms and airway inflammation and were surprised that it does not appear to cause more severe lung diseases," notes Joshi. "Some studies say marijuana causes lung cancer. Others refute that and some even say it can be used to treat cancer. There just isn't any clear data."

Joshi expects the recent expansion of medicinal and recreational marijuana use in some states to provide increased and more precise data for future research. He warns that increased use outside of medical applications may be a slippery slope, and he believes we're still a decade away from fully understanding the relationships between marijuana use and its effects, whether positive or negative.

"We're in the middle of a social experiment with marijuana," he says. "Only time will tell. Meanwhile, we need to protect our youth by discouraging recreational marijuana use."