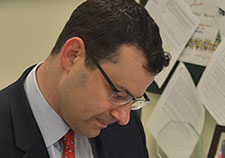 Dr. Adam Rose, with VA and Boston University, studies quality measurement, especially in the area of anticoagulation and other cardiovascular therapies. (Photo by Kristin Pressley)

Dr. Adam Rose, with VA and Boston University, studies quality measurement, especially in the area of anticoagulation and other cardiovascular therapies. (Photo by Kristin Pressley)

Black patients are more likely to have poorer anticoagulation control compared to white patients, which can lead to higher rates of stroke and major hemorrhage, suggest the results of a VA study published online in the American Journal of Medical Quality in March 2014. The results, though derived from Veteran records, are indicative of a nationwide health disparity.

In the study, led by Dr. Sowmya Rao, a senior statistician at the Bedford VA Medical Center in Massachusetts, researchers analyzed data from more than 18,000 Veterans treated with the popular anticoagulant warfarin. Of those Veterans, 9,572 were black, and the rest were white.

The study found that black patients were younger and more likely to be female, and their mean time in what researchers call the sweet spot, when blood is neither too thick nor too thin, was 6.5 percent lower than the mean for white patients.

Warfarin, which was first approved for use as a medication in 1954, is used to prevent blood clots. It is the most widely prescribed anticoagulant in the America. Warfarin is commonly prescribed for patients at an increased risk of blood clots, such as those with irregular heart rhythm, a mechanical heart valve, or a history of clots.

Precise dosing is critical with warfarin

"With most medicines, it's quite common to double or even triple doses to improve effectiveness. But with warfarin, the [safe] range is really only about 5 and 10 percent of the dose,"notes Dr. Adam Rose, a staff physician at Bedford and a coauthor of the study. "Too low and the patient can have a stroke, too low and they're at risk for bleeding. It is arguably the most dangerous medicine we use. With the possible exception of chemotherapy medicine, warfarin has arguably the narrowest therapeutic window. You have to be extremely precise."

According to Rose, precision takes time and effort, especially when dosage can change week by week. "It's like a ballet where the stakes are very high. If you don't get it just right, the patient can have a major bleeding event or stroke. They can end up in the hospital, the nursing home, or dead."

Determining the cause of the disparity

The Institute of Medicine has identified three steps for reducing health care disparities such as this. First, identify a problem; in this case, black patients have poorer rates of anticoagulation control. Second, determine the cause, and third, address the problem.

The study by Rose's group deals primarily with step two. "We know it's not biological,"he says. "Almost certainly [the disparity] has to do with some aspect of their social existence, health care, or socioeconomic factors."

In fact, by statistically adjusting for 14 such patient characteristics, such as poverty and age, the researchers were able to account for much of the disparity and lower it from 6.5 percent to 2 percent. The remaining disparity, Rose theorizes, is probably tied to social factors simply not covered in his team's analysis.

Rose worked on another study in 2011 that simulated the impact of a 5 percent improvement in anticoagulation time in a population of 67,000 patients, roughly half the Veterans receiving warfarin from VA currently.

"With a 5 percent improvement, you would prevent 135 major hemorrhages and about 90 ischemic strokes per year,"says Rose. "In the process, the government could save $8 million per year on these patients just by avoiding the adverse effects. That doesn't even fully account for the long-term cost savings, since we stopped our simulation at two years and the cost of many strokes go on for years after that."

Needed: Strategies to close the gap

The third step, addressing the problem, could prove the most challenging because VA can't affect many of the variables, such as poverty or the region where a person lives. Still, by identifying the specific issues black patients face, Rose says VA could work to reduce some of the disparity. Consider patient age, for example.

"We know black patients on warfarin tend to be younger. With this drug, patients have to come in for regular blood tests to see if it's working,"says Rose. "If the anticoagulation is well-controlled, that might be every four to six weeks. For patients struggling to get it under control, it can be every week. It's a lot more difficult to schedule weekly office visits when you're 40 and you have young children, old parents, and hopefully a job than it is when you're 65 or 70. They're more likely to have a hard time making a Tuesday 10 a.m. appointment. Just knowing that can improve care. That's why VA is doing a lot to measure [health disparities] and even more to improve on them, but there is still a ways to go."