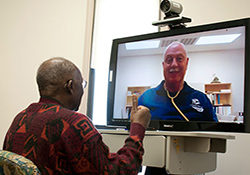 In a VA study, videoconferencing proved to be an effective way to help Veterans in rural areas lose weight.

In a VA study, videoconferencing proved to be an effective way to help Veterans in rural areas lose weight.

Is it possible to lose weight by watching TV?

The answer is yes, when the "TV show" is a special program designed to help people lose weight and keep it off. Veterans using a videoconferencing weight loss program tended to lose more weight than did their non-participating peers, according to a VA study published in the Winter 2014 issue of the Journal of Rural Health . Just as important, they kept the weight off.

The results are good news for Veterans and doctors alike. Obesity and weight gain among Veterans is a national epidemic, often resulting in poorer quality of life, increased use of health care facilities, and a rise in life-threatening illnesses. "Weight loss is very complex in our Veteran population," said April Ahrendt, a dietician in the Sioux Falls VA Health Care System. According to Ahrendt, many Veterans struggle due to their complex medical conditions. Issues such as type 2 diabetes, injuries sustained during their service, cardiovascular complications, and prescription medications that cause weight gain all contribute to the problem.

In response, VA developed the MOVE! Weight Management Program and mandated it be available at every VA facility in the country. MOVE! incorporates weight management, diet, physical activity, and behavioral modification topics into twelve one-one hour courses held weekly. "This isn't just a diet," said Ahrendt. "This is changing the way Veterans live." For rural Veterans, however, weight-loss options remain limited, something Ahrendt wanted to change.

Using videoteleconfering technology, Ahrent and a team of specialists broadcast MOVE! classes live to 60 Veterans at community based outpatient clinics in Aberdeen, S.D., Spirit Lake, Iowa, and Sioux City, Iowa. The Veterans, who had been advised by their doctor about their weight and had agreed to try out MOVE!, were compared to a group of similar Veterans who had declined treatment.

Not suprisingly, when the results were tabulated, participants who attended at least five of the twelve classes lost, on average, 12 pounds more than those who did not. What's more, they kept it off. "That's what's most encouraging," said Ahrent. "Weight regain is the biggest problem. If they can keep it off for a year they're much more likely to be successful."

While the research was limited in that Veterans who declined to take part may have been less motivated to begin with than their peers who volunteered for the study, the results thus far exceed the researchers' expectations and highlight what appears to be an effective way for Veterans looking to shed a few pounds. "The big thing with this technology is it allows Veterans to support each other as a community," said Ahrent. "That's incredibly important when it comes to weight loss and for our rural Veterans, a barrier they can't easily overcome. With MOVE!, they're able to interact with not only VA experts, but other Veterans," and that, says Ahrent, may be the difference between success and failure.

This article was published on the Health section of the VA website on January 9, 2014: http://www.va.gov/health/NewsFeatures/2014/January/Televised-Weight-Loss-Program-Works-for-Veterans.asp.