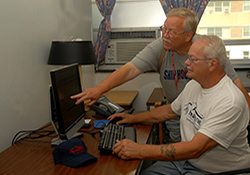 A staff member at the Albany Stratton VA Medical Center introduces the My HealtheVet program to a Veteran. (Photo courtesy of the Albany VAMC)

A staff member at the Albany Stratton VA Medical Center introduces the My HealtheVet program to a Veteran. (Photo courtesy of the Albany VAMC)

Veterans with online access to their health records reported better communication with their doctors and higher levels of overall satisfaction with their care, according to a VA-sponsored study. The study was published in March 2013 in The Journal of Medical Internet Research. The findings confirmed prior research that showed the benefits of shared electronic health records for both patients and their caregivers.

Between 2000 and 2010, nine VA facilities in Oregon, Florida, New York, and Washington, D.C., recruited nearly 7,500 Veterans to enroll in My HealtheVet when it was still a pilot program. Once enrolled, patients could access clinical notes, problem lists, vital signs, medications, allergies, appointments, and laboratory results, among other personal medical data.

Dr. Susan Woods and her team conducted the study at the Portland, Ore., VA Medical Center, as it had the highest rate of patient enrollment, 72 percent. Their goal was to determine what, if any, impact access to health data would have on Veterans. Veterans were broken into five focus groups based on how often they accessed their records. A total of 30 patients and six family members between ages 49 and 82 attended group sessions. At the sessions they answered questions about their experiences with the online medical records.

Participants cited improved understanding and greater insight into their care as major benefits of the program. "I can go in and ask more intelligent questions," said one Veteran in the study. "It kind of better prepares me for the upcoming appointment." Another major benefit was that the program allowed Veterans to share their records with non-VA providers.

Patients were also able to exert more control over their care by researching options based on doctors' notes. This allowed them to ask educated questions when they went in for appointments, according to the study. "It just probably made me healthier than I might have been without having the information available," said one Veteran.

A number of participants in the study described how access to their records allowed them to receive better care due to their ability to remind their caregiver of things that were discussed or identified at previous appointments. Researchers say these cases of patients serving as their own "clinical reminders" to ensure follow-up care is what electronic medical records are all about.

While the responses were positive overall, some Veterans did report difficulties in viewing their records. Others indicated they were stressed by reading medical information they might not fully understand, or a doctor's comment they took offense to.

Because the study was limited only to those Veterans who regularly accessed their records, it may not be indicative of the current My HealtheVet program overall. Some patients also reported technical problems with the site or simply chose not to access their records. While the level of patient interaction varied, one thing is clear: Online health records, among other trends, are changing the way doctors communicate with their patients. The old one-sided patient-doctor relationship has changed, according to the study, and taking its place is a partnership between medical staff and their patients.

This article was published on the Health section of the VA website on February 20, 2014: http://www.va.gov/health/NewsFeatures/2014/February/E-records-Enhance-Patient-Doctor-Communication.asp.